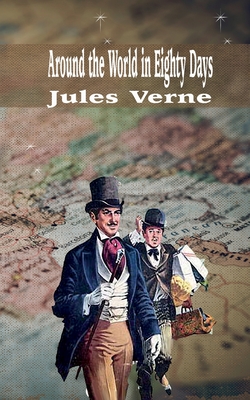 Jules Verne is the master of classic adventure tales. Around the World in Eighty Days is just more proof that his excellent writing skills put the readers right in the book with Phileas Fogg and Passepartout. Because of a bet by his friends, Phileas sets out to get all the way around the world in eighty days.

Phileas is a rich man, but also very precise about his life. He wants everything done the way he likes and will get rid of anyone who does not do that. The wager starts when he is at a local club and begins an argument about whether a person could get all the way around the world in such a short period of time. He believes he can because a new railroad has been opened in India. Because he is so sure of his mathematical figures, he takes the wager and sets off with his new valet.

He has a carefully planned route for them to travel by steamer boat and railroad. Their itinerary includes crossing the Mediterranean Sea, the Red Sea, the Pacific Ocean and the Atlantic Ocean and also across several continents. What he does not plan on is that a bank robber left England at the same time they did and a detective mistakes Phileas for the robber and follows them.

Along the way, Phileas bribes people to rush their trip, they rescue a woman about to be sacrificed, ride elephants and miss their boats. They lose a few days and have to rush to make up the lost time. When they finally get to San Francisco, their adventure really speeds up They encounter a big herd of buffalo and are also attacked by Sioux Indians. All the while, Phileas is still trying to make up lost time and get back to England in eighty days.

iBoo Press House uses state-of-the-art technology to digitally reconstruct the work. We preserve the original format whilst repairing imperfections present in the aged copy. All titles are unabridged (100% Original content), designed with a nice cover, quality paper and a large font that's easy to read.