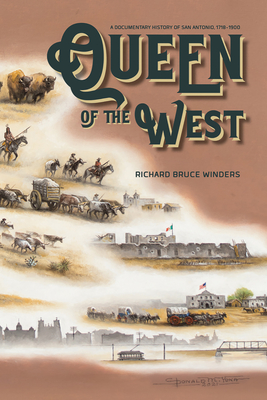 By 1850, the frontier settlement of San Antonio had seen more than its share of hardships, Indians attacks, rebellions, and repeated military occupations.  These events all marked the towns recent past.  In 1854, though, the editor of the Alamo Star felt confident enough in the town’s progress to announce that the embattled outpost would soon be known as the “Queen of the West.”  The Star, of course, capitalized on the name of the town’s most famous landmark—the Alamo.

Although historians have written about the battle and the town, no one has yet adequately explained how they are connected to each other.  A deeper look at the development of San Antonio shows that it was not only the site of the Battle of the Alamo, it was the center of much of the history of Spain, Mexico, Texas, and the United States.

Queen of the West: A Documentary History of San Antonio, 1718–1900 takes readers through a series of important writings detailing how San Antonio transformed from an important but threatened outpost to a thriving Edwardian city.  The author, Richard Bruce Winders, provides an introduction to each eye-witness account providing diverse perspectives on the history of San Antonio by the people who  actually lived it.

The author is an internationally noted authority on the topic of the Alamo.  The work will be a valuable resource for students of history and teachers.  The book draws together a body of work that readers would have a difficult time finding on their own.

The cover art is by noted artist Don Yena.

RICHARD BRUCE WINDERS served as historian and curator at the Alamo for twenty-three years before leaving to become an independent scholar and historical consultant. He is a noted authority in the area of Mexican-United States Borderlands and is the first ever Visiting Scholar to The Texas Center at Schreiner University in Kerrville, Texas.  Bruce is well-known for his ability to bring history to life and has worked with everyone from British rock stars, foreign dignitaries, American politicians, and public educators.  He is the author of Panting for Glory: The Mississippi Volunteers in the Mexican War, Firearms of the Texas Frontier: Flintlock to Cartridge, Sacrificed at the Alamo: Tragedy and Triumph in the Texas Revolution, Davy Crockett: The Legend of the Wild, Frontier, and Mr. Polk’s Army: The American Military Experience in the Mexican War.