In the Twinkling of an Eye: A Novel of Biological Terror and Espionage (The Guild Series #2) (Paperback) 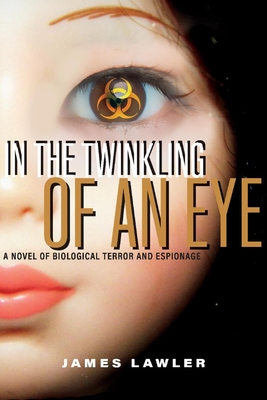 This is book number 2 in the The Guild Series series.

"In the Twinkling of an Eye" is a story about espionage, family love, and loyalty, focused on a Russian-North Korean conspiracy to develop a devastating biological weapon for assassination, terror and genocide, as written by a senior CIA operations officer whose career was devoted to battling the spread of weapons of mass destruction. This is the second book in the thrilling Guild Series!

In 1986, a Ukrainian teenager loses his father and his own left eye to the Chernobyl nuclear disaster, but he escapes and becomes a top-notch genetics engineer at Moscow State University. There, he is seduced into joining a well-funded new genetics institute where he hopes to develop a genetic solution (better than CRISPR) to cure his twelve-year old daughter's leukemia that is a result of her damaged genes that she inherited from his radiation exposure. But soon he learns that the Institute is actually a coverup run by the Russian intelligence service and is secretly developing advanced genetic bioweapons with the North Koreans for assassination, terror, and genocide. The Ukrainian scientist feels he must remain at the institute, however, in order to find a cure for his dying daughter.

Parallel to this story, a young North Korean girl escapes to South Korea via a North Korean attack tunnel beneath the DMZ. Her father, the North Korean military mining engineer who designed the tunnel, dies during the attempt, and she loses her younger brother with whom she was escaping. She is adopted by a Korean-American US military officer and grows up to be an FBI special agent devoted to battling WMD, who secretly recruits the Ukrainian scientist.

In the course of their work, the FBI agent equips the Ukrainian scientist with a new glass eye with microelectronics on the nano scale that enables him to record covertly everything he sees and hears and transmit his intelligence to her daily through one of his daughter's dolls that has advanced artificial intelligence. It is perfect revenge for a character, who has lost his eye as a teenager, is scarred for life and has lost his beloved father due to Soviet incompetence at Chernobyl. The doll is virtually sentient and is a stand-in for the female FBI agent whom she resembles. In so doing, the agent overcomes the biggest obstacles that spies traditionally face: safely communicating frequently with their case officer for operational guidance and psychological reinforcement and transmitting critical information in a timely fashion.

Together, the scientist and the FBI agent must prevent Russia and North Korea from using the bioweapons for assassination and mass murder of regime opponents.

James Lawler serves as a national security consultant and is the Senior Partner at MDO Group, which provides HUMINT training to the Intelligence Community and the commercial sector focused on WMD, CI, technical and cyber issues. Mr. Lawler is a noted speaker on the Insider Threat in government and industry.

Prior to this, Mr. Lawler served for 25 years as a CIA operations officer in various international posts and as Chief of the Counterproliferation Division's Special Activities Unit.

Mr. Lawler was a member of CIA's Senior Intelligence Service (SIS-3) from 1998 until his retirement in 2005. He was a specialist in the recruitment of foreign spies, and he spent well over half of his CIA career battling the proliferation of weapons of mass destruction. As Chief of the A.Q. Khan Nuclear Takedown Team, which resulted in the disruption of the most dangerous nuclear weapons network in history, Mr. Lawler was the recipient of one of the CIA's Trailblazer Awards in 2007, marking the 60th anniversary of CIA. In 2004, former DCI George Tenet sent Mr. Lawler a note which stated, "Jim, what you and your team have achieved will rank up there as one of the most spectacular intelligence accomplishments in the history of the CIA. It occurred because of your exemplary leadership. Not only are we in the process of taking down a network, but we are also in the process of disarming a country as a result of your fine work. With respect, George J. Tenet" And former DDCI John McLaughlin noted that the effort was "the closest thing I've ever seen to a perfect intelligence operation."

Mr. Lawler also received the Director's Award from DCI George Tenet, the U.S. Intelligence Community's HUMINT Collector of the Year Award, and the Donovan Award from the CIA's Deputy Director of Operations.

Prior to his career in intelligence, Mr. Lawler practiced law and was the president of a steel components company in Texas. He is a graduate of Rice University, Houston, Texas, and the University of Texas School of Law. He is married to Ellen and has three children and seven grandsons. He has completed two novels: "Living Lies," an espionage story of the Iranian nuclear weapons program, and "In the Twinkling of an Eye," about recruiting a spy at the heart of a devastating covert Russian-North Korean genetic bioweapons program. Both have been cleared by the CIA's Publication Review Board. "Living Lies" was published in August 2021 and "In the Twinkling of an Eye is to be published in early 2022. He is currently writing his third espionage novel, "The Traitor's Tale," which is about treachery and treason deep within the CIA.