Meet Me at the Lions (Paperback) 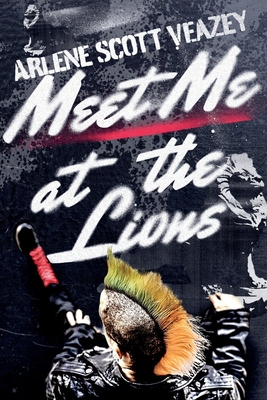 Seventeen-year-old punk rocker Jonathan Hernandez has never fit in, and he likes it that way.

His anger, leather jacket, and mohawk hair have served him well, keeping everyone at bay. For one so young, he has suffered more than his share of tragedy and loss. One night at a school event, Jonathan lets his temper fly, and the consequences are grave for a kid who has never been far from his home in Texas. Expelled from school in the spring of his junior year, he must spend the following fall semester in a tiny village on the east coast of England. He will live with and be homeschooled by his father, who he barely knows and against whom he holds a pretty serious grudge. A new stepmother and a half-sister complicate things further.

Jonathan hates everything about England: the cold, dreary weather, the bland food, and boring TV. There is nothing to do, and he doesn't know a soul. Jonathan often walks along the beach to clear his head. There, under two great stone lions, he meets Little Kenny, an elderly man who is intrusive but intriguing. Despite the difference in their ages, these two will form an unlikely friendship.

And then, there is Bridie, who has suffered much but has a quick wit, a penchant for fun, and a tender spot for Little Kenny. Jonathan falls hard for the green-eyed beauty with purple hair and a contagious smile.

They climb ancient castle keeps, wade in the frigid North Sea, and eat a whole lot of ice cream. Jonathan forms a new understanding of friendship, family, and home. At 80 years old, Kenny gains confidence and a new lease on life. Bridie finds peace within and has high hopes for her future.

Together, these three friends form a bond, tackle the town bully, and rebuild much more than a garden.

Arlene Scott Veazey is a woman "of a certain age" who finally decided it was time to realize her dream and become a published author. Arlene is a retired English teacher who has had several amazing oppotunities to travel, including two mission team trips to Africa where she gained perspective and renewed appreciation for a full and comfortable life. She is the proud mother of two awesome grown kids. Katybeth and her husband, Dan, live in Maine. Conner is a tall Texan through and through. Arlene resides, for now, in the blistering heat of San Antonio, Texas. She enjoys her home and garden. Once in a while, she attempts a craft or two, but she'd rather just read and write. Arlene has too many books, if too many books is a thing. She dreams of traveling to cooler climates and checking things like seeing Tintagel and Eilean Donan Castle off her bucket list. Arlene loves her Lord, her kids, and her grandpuppy, Lochlan. She will never get her fill of white-steepled or Norman churches. She can always be bribed with tea, chocolate, or ice cream. Arlene was a military brat, who lived in five states, and two foreign countries, Japan and England. However, it was the United Kingdom and all things English that won her heart when she attended Woodbridge American High School in Suffolk, England. There she was introduced to Shakespeare, Chaucer, Austen, Wordsworth, and the Bronte sisters and fell in love with British Literature. She is thankful for many blessings, including a loving family, a sustaining faith, and supportive friends.