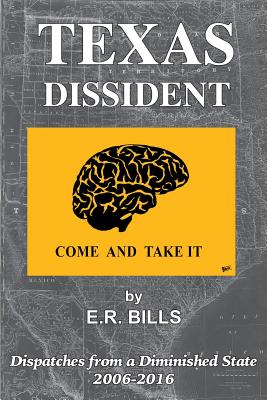 Texas is known as a stronghold of conservative politics and values--in many cases ultraconservative--but those beliefs are taken to task in E.R. Bills' new book, Texas Dissident: Dispatches from a Diminished State, 2006-2016.

A growing number of Texans are tired of Lone Star Conservatives, sick of being embarrassed by their political representatives and horrified by the devolution of the state conversation in terms of race, sex, sexual orientation, immigration, religious freedom, environmental responsibility, etc. From 2006-2016, Texas contrarian E.R. Bills came out swinging on these issues, and in these insightful, evocative missives, spares no purveyor of the farcical Lone Star status quo

Bills unique perspective on these tops is indispensable. His last offering, Black Holocaust: The Paris Horror and a Legacy of Texas Terror (Eakin Press, 2015) documented an era when Texans burned an average of one African American a year at the stake for three decades. And his seminal book, The 1910 Slocum Massacre: An Act of Genocide in East Texas (The History Press, 2014) was a catalyst for the dedication of a historical marker commemorating the atrocity.