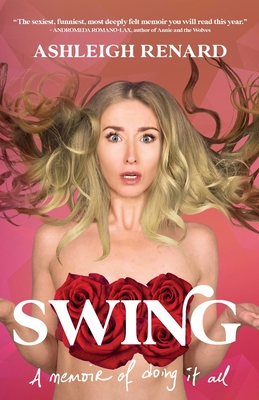 Raised in figure skating, Ashleigh brought the quest for perfectionism into marriage and motherhood. Three kids and a decade later, she and her husband think a little sexy fun may be the perfect remedy for the exhaustion of hard-core adulting. Everyone deserves a little break, don't they?

From sex clubs to invite-only parties to dating apps for couples, Ashleigh awkwardly discovers they've made a slight miscalculation, underestimating the complexities of the lifestyle and overestimating the strength of their marriage. Hilarious, heartbreaking, and hopeful, what will she do when she realizes she's taken "doing it all" to a level she never intended?

PRE-ORDER NOW AND GET THE AUDIOBOOK FOR FREE

To claim your free audiobook, send a screenshot of your order to orders@manitobawomanmedia.com.

"Renard's narrative voice is lighthearted and witty ... a thoughtful work that delves into the intricacies of marriage and longing."

"Swing is the sexiest, funniest, most deeply felt memoir you will read this year."

Andromeda Romano-Lax, author of Annie of the Wolves and Behave

"In Swing Ashleigh Renard has created an entirely new genre: the hot self-help book. With its wit and grace and wisdom-and some steamy interludes-this book belongs on your shelf next to Glennon Doyle and Brene Brown and Luvvie Ajayi."

"Charming, hilarious, and deeply wise, Ashleigh Renard's remarkable debut is that rare thing: A memoir that both entertains and instructs."

Joanna Rakoff, author of A Fortunate Age, My Salinger Year, and The Fifth Passenger (forthcoming)