Finding Fire: Cooking at its most elemental (Hardcover) 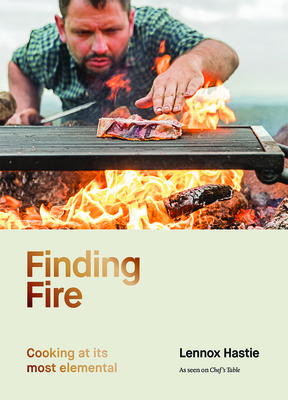 Finding Fire is a book about cooking with fire. Now with a new cover, it tells the story of how the UK-trained chef Lennox Hastie learnt the language of fire and the art of harnessing it. The book presents more than 80 recipes that celebrate the instinctive, focused cooking of ingredients at their simple best using one of the oldest, most fundamental cooking tools.

In Finding Fire, Lennox explains the techniques behind creating a quality fire, and encourages readers to see wood as an essential seasoning that can be varied according to how it interacts with different ingredients. Recipes are divided by food type: seafood, vegetables, meat (including his acclaimed steak), fruit, dairy, wheat and bases.

Alongside his recipes, Lennox tells of his journey from Michelin-star restaurants in the UK, France and Spain to Victor Arguinzoniz's Asador Etxebarri in the Basque mountains and, ultimately, to Australia to open his own restaurant, Firedoor. The result, is an uncompromising historical, cultural and culinary account of what it means to cook with fire.

Lennox Hastie is a UK-born and trained, Sydney-based chef with a fascination for the limits of what can be cooked over an open flame. He honed his skills over five years working with Victor Arguinzoniz at the globally renowned Etxebarri, in the Basque Mountains, before returning to Australia to open the country's only exclusively wood-fuelled restaurant. At Firedoor, in Sydney's Surry Hills, he has a particular affinity with fish and vegetables, but his 200-day aged rib of beef redefines how a steak can and should be cooked. That steak is considered to be the best in the country and was described by US chef David Chang as the best of his life.

Finding Fire is his first book and has been translated into four languages.