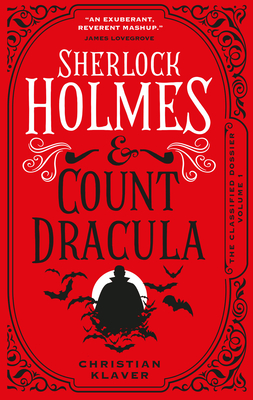 In this thrilling supernatural mystery, Sherlock Holmes and Count Dracula must join forces to banish a terrible enemy...


Sherlock Holmes is dead. His body lies in a solitary grave on the Sussex Downs, England. But Dr. Watson survives, and is now given permission to release tales in Sherlock’s ‘classified dossier’, those cases that are, dear reader, unbelievable – for their subject matter is of the most outré and grotesque nature.

In this thrilling first instalment of The Classified Dossier, a Transylvanian nobleman called Count Dracula arrives at Baker Street seeking the help of Sherlock Holmes, for his beloved wife Mina has been kidnapped.

But Dracula is a client like no other and Sherlock and Watson must confront – despite the wild, unbelievable notion – the existence of vampires. And before long, Sherlock, Watson and their new vampire allies must work together to banish a powerful enemy growing in the shadows….

Christian Klaver is author of Shadows Over London and the Nightwalker Series, and has also written over a dozen novels in both fantasy and sci-fi, as well as for magazines such as Escape Pod and Dark Wisdom. He's worked as book-seller, bartender and a martial-arts instructor before settling into a career in internet security. @mrchrstn

"Sir Arthur Conan Doyle and Bram Stoker were friends and admired each other's work. I'm happy to think that both of them would have greatly enjoyed Christian Klaver's exuberant, reverent mashup of their two best-known characters."
James Lovegrove, author of The Cthulhu Casebooks

"A great start to a new series. Klaver knows his Holmes – and his Dracula – and tells a compelling tale that will delight all fans of Holmes and things horrific."
Eric Brown, author of The Martian Menace

"A scintillating mash-up of the two big names in Victorian mystery and horror... Put your feet up, light your pipe, pour yourself a nice cup of warm blood, and enjoy."
Philip Purser-Hallard, author of Sherlock Holmes: The Vanishing Man

"I honestly couldn’t put it down… You’ll hold your breath, I promise. It’s quite simply the most believable Holmes/fantasy crossover I’ve ever read"
Age of Steam

"Klaver’s worldbuilding is immersive… with a thrilling pace"
KIRKUS

"Klaver dazzles with an adventure rooted in complex feelings about family loyalties, and full to the brim with mystery."
Tobias S. Buckell