Wax and Gold: Journeys in Ethiopia and other roads less travelled (Paperback) 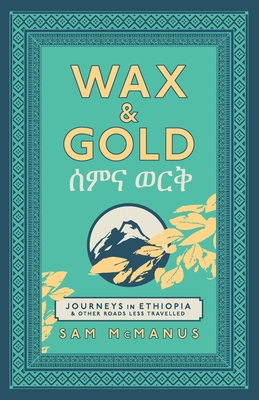 Don't catch a leopard by the tail, but if you do, don't let it go - Ethiopian Proverb

Author Sam McManus has collated 15-years' worth of adventure travel writing in Ethiopia, Japan, Bolivia, Egypt, Kyrgyzstan, Iran, Mongolia, Lebanon, Oman & Costa Rica in this collection of travel stories, which revolve around a central solo journey exploring the mountains of Ethiopia over a three-month period in 2015, which led to the founding of sustainable adventure travel company YellowWood Adventures.

The most prized form of Ethiopian Amharic prose and poetry, loosely translated as 'wax and gold' ሰምና ወርቅ sam-enna warq], is meticulously comprised with a focus on the duality of its meanings. The surface meaning, the wax, must be stripped away to reveal the hidden core of gold underneath. Ethiopia as a country also encourages you to look deeper within yourself, to fully understand and appreciate a deeply rich spiritual significance, that often resonates beneath simple or plain exteriors.

McManus grew up in the countryside of Kent in the UK until he walked out one midsummer morning into a lifetime of travel and adventure. Travel and books: these two passions have fuelled journeys to over 60 countries whilst living on four continents. He has always favoured the road less travelled: whilst living in Japan he took his tent and surfboard and spent three months island-hopping down the 1100km of Ryukyu archipelago; in the Amazon rainforest he spent two weeks with an Indian guide carrying only a machete, fishhooks, salt, sugar and cocoa leaves, learning to live off the land.

Be it the highest plateau in Africa, ice-climbing in the Tian Shan Mountains or exploring the lost assassins' castles in the Alborz Mountains of Iran; a veritable mountain of banana sandwiches, history books, novels, travel writings and biographies always accompany these adventures, and wherever possible a horse or two. This is pure travel writing:

"Ethiopia can be difficult, prickly, cutting, ruthless, unforgiving, infuriating, stark, confused and complex. Yet, like a densely constructed novel exposing the fundamental contradictions of human nature, or, say, the bright plumage of a flowering cactus, when her treasures are revealed, they are all the more exceptional for the contrasts they manifest. Rarely do I open a book or read a travel article on Ethiopia that does not include the famous line from 18th century historian Edward Gibbon's masterwork The History of the Decline and Fall of the Roman Empire: "Encompassed on all sides by the enemies of their religion, the Ethiopians slept near a thousand years, forgetful of the world by whom they were forgotten." It still perfectly encapsulates what makes this land so unique, so much from ancient times still remaining.

Although the modern world now has a stable foothold in the cities of Ethiopia, when one ventures out to the interior, this thin veneer rapidly falls away, unveiling the unchanged soul of the nation. One memory illustrates this perfectly: A man and his young son were ploughing a terraced wheat field below their grass hut with two oxen. Their field on the edge of a small river, this fell away off the high plateau in a series of three waterfalls. Their plough had a small sharp metal tip lashed to its wooden triangular sides, the long beam and ploughman's handle comprised of bark-stripped eucalyptus. They wore a few items of Western clothing - a shirt and a raggedy pair of trousers, both in bare feet. Aside from these few tiny elements that have seeped in from the outside world, the scene was timeless.

I believe it is the search for this timelessness that continues to drive me to travel to the wilder corners of this world."