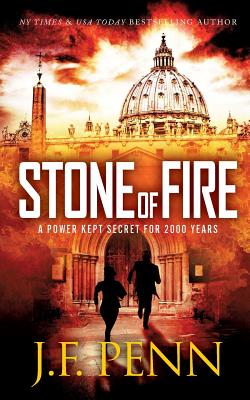 This is book number 1 in the Arkane Thrillers series.

A power kept secret for 2000 years. A woman who stands to lose everything.

India. When a nun is burned alive on the sacred ghats of Varanasi, and the stone she carried is stolen, an international hunt is triggered for the relics of the early church.

Forged in the fire and blood of martyrs, the Pentecost stones have been handed down through generations of Keepers who kept their power and locations secret.

The Keepers are being murdered, the stones stolen by those who would use them for evil in a world transformed by religious fundamentalism.

Oxford University psychologist Morgan Sierra is forced into the search when her sister and niece are held hostage. She is helped by Jake Timber from the mysterious ARKANE, a British government agency specializing in paranormal and religious experience. Morgan must risk her own life to save her family, but will she ultimately be betrayed?

From ancient Christian sites in Spain, Italy, and Israel to the far reaches of Iran and Tunisia, Morgan and Jake must track down the stones through the myths of the early church in a race against time before a new Pentecost is summoned, this time powered by the fires of evil.

The first in the ARKANE series, Stone of Fire is a fast-paced, action-packed conspiracy thriller with an edge of the supernatural.

The ARKANE thrillers in order:

One Day in Budapest #4

Day of the Vikings #5