The Other Man Down: A Mother's Journey After the 'American Sniper' Tragedy. (Paperback) 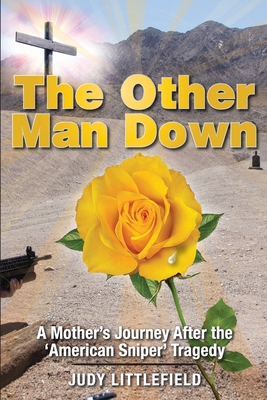 The Other Man Down: A Mother's Journey After the 'American Sniper' Tragedy. Littlefield's account begins in 2013 after her son, Chad Littlefield, and his friend former Navy SEAL Chris Kyle were gunned down by Eddie Ray Routh at a Texas shooting range. Kyle was well known for his autobiography and film, "American Sniper." Chad raised in a small town, was a husband, father, and American patriot.

Littlefield relates how she found healing through her faith during a very public trial and the sentencing in 2015 of Routh, a veteran who Chad and Chris were trying to help. Her book is filled with scripture, memories of her son, and the surreal yet real moments she faced.

"A public trial would be a challenge for anyone to endure, but the added pressures of news media and reporters brought this to another level," Littlefield said. "We were living out our most personal moments and learning the most difficult pieces of information about our son's death, all while being filmed and making the front page of the newspapers."

In her book, Littlefield tells readers that despite her best efforts, she "couldn't outrun the mounting grief that awaited me at every turn." She leaned heavily on God and her family for support and encouragement during this horrific time.

"Judy courageously tells her story in hopes of making a difference and letting others know they're not alone," said Chris Schafer, CEO at Tactical 16. "She speaks directly to readers who are desperately trying to navigate through the process of losing a loved one in service to their country or other circumstances. Her story is one of tragic loss and love and family bonds that can never be broken."