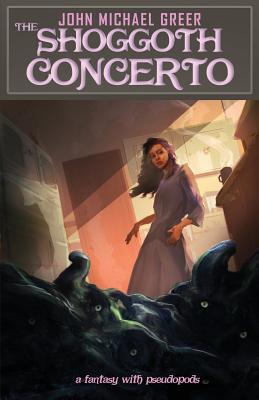 
In the Shadow of Hob's Hill...Brecken Kendall doesn't plan on becoming a composer. She also doesn't expect to encounter one of the eldritch realities H.P. Lovecraft borrowed for his weird fiction. A sophomore at Partridgeville State University on the edge of the New Jersey pine barrens, she's trying to leave behind the bitter memories of her childhood and get a degree in music education. Lovecraft? He's just one of the authors discussed in a class she's taking that semester, where she learns about the polymorphous monsters called shoggoths. Those are nothing but an old legend, she thinks...until a young shoggoth, traumatized by a night of fire and death, appears in the kitchenette of the converted garage where Brecken lives.
A lucky chance-or is it more than that?-allows Brecken to communicate with the creature, and she decides to give it the food and shelter it so desperately needs. Over the weeks that follow, an unlikely bond grows between them. Brecken will need all the help the creature she nicknames Sho can give her, for her plans for her future are shattered by the awakening of an unexpected talent for music composition; her selfish and abusive boyfriend is seeking power in strange tomes of eldritch lore; the secret organization that annihilated all but one of the shoggoths under Hob's Hill is still hunting for survivors of that terrible night; the living darkness the old books name Nyogtha, The Thing That Should Not Be, is weaving its own cryptic plans-and from beyond the boundary where curved time meets angular time, the terrible Hounds of Tindalos have scented their prey...