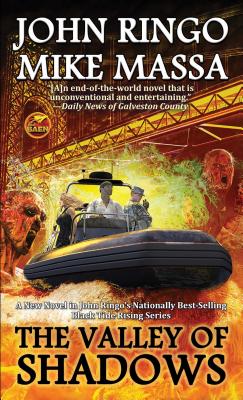 This is book number 6 in the Black Tide Rising series.

PROTECT THE CLIENT. FIGHT THE HORDE. SURVIVE THE FALL.

Tom Smith, global managing director for security, can see a lot from his Wall Street office. The Statue of Liberty. Battery Park. And everywhere, a ravening zombie horde. Smith is paid to preserve the lives and fortunes of employees, billionaires, and other clients. Now that the infected are tearing through the city, the country, and the world, Tom’s job has gotten a lot harder. Good thing Smith, late of the Australian special forces, isn’t a man to give up easily. But saving civilization is going to take more than the traditional banking toolbox of lawyers, guns, and money.

About The Valley of the Shadows:
". . . fast-paced . . .  building to an exciting climax . . . Ringo and Massa have written an end-of-the-world novel that is unconventional and entertaining."—Daily News of Galveston County