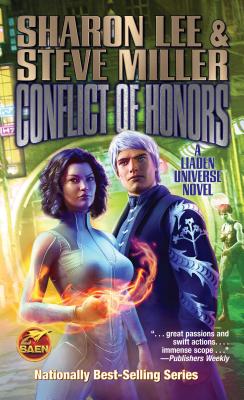 This is book number 6 in the Liaden Universe® series.

A CLASSIC OF THE LIADEN UNIVERSE®!

When Priscilla Delacroix y Mendoza was sixteen years old, she was declared dead by the High Priestess of the Goddess and by her mother. Banished to survive on her own, Priscilla has roamed the galaxy for ten years as an outcast—to become a woman of extraordinary skill. . . .

Now an experienced officer assigned to the Liaden vessel Daxflan, she’s been abandoned yet again. Betrayed by her captain and shipmates, she’s left to fend for herself on a distant planet. But Priscilla is not alone. Starship captain Shan yos’Galan is about to join Priscilla’s crusade for revenge. He has his own score to settle with Daxflan. But confronting the sinister crew will be far easier—and safer—than confronting the demons of Priscilla’s own mysterious past.

“Compelling and wondrous, as sharp and graceful as Damascus steel, Necessity's Child is a terrific addition to Lee & Miller's addictive series.”—Patricia Briggs

love of cats, a thirst for justice, and a staff of true power. Since then, the husband-and-wife have written dozens of short stories and twenty plus novels, most set in their star-spanning Liaden Universe®. Before settling down to the serene and stable life of a science fiction and fantasy writer, Steve was a traveling poet, a rock-band reviewer, reporter, and editor of a string of community newspapers. Sharon, less adventurous, has been an advertising copywriter, copy editor on night-side news at a small city newspaper, reporter, photographer, and book reviewer. Both credit their newspaper experiences with teaching them the finer points of collaboration. Sharon and Steve passionately believe that reading fiction ought to be fun, and that stories are entertainment. Steve and Sharon maintain a web presence at http://korval.com/