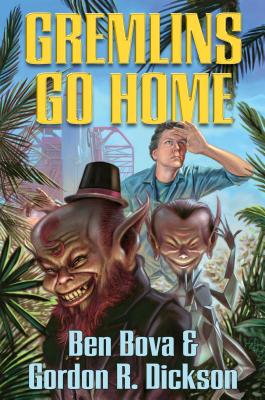 These little dudes may be the stuff of legend, but they’re just as real as you and me. Far from the mythical, magical creatures of rumor, they are actually tiny aliens, marooned for centuries on this miserable mudball known as Earth. And they want just one thing: Off!

Now, human technology may finally make a reality of their dream to leave this pathetic planet behind. NASA has a new rocket and it’s Mars-bound. All the gremlins need do is hijack it and set a course for their homeworld of Gremla.

The only thing lacking is a hapless human accomplice . . .

HOME IS JUST ONE CLEVER TRICK AWAY!

About The Best of Bova Volume III:
“Ben Bova is a living legend. . . .The hallmarks of Bova’s fiction . . . are believable human characters and complete rationality. He adheres to the philosophy articulated by John W. Campbell, Jr. . . . that the best science fiction involves not just science and technology, but their impact on people. . . . [I]f you care about the history of science fiction, or if you just want to read some good stories, you’ll be happy with this one.”—Analog

About the award-winning stories and novels of Ben Bova:
“Technically accurate and absorbing. . .”—Kirkus

About Mars, Inc., by Ben Bova:
“. . .perfectly enjoyable as an SF book (could Bova write anything that wasn’t enjoyable?), Mars, Inc. has that torn-from-the-headline vibe that’s obviously intended for a larger audience. . . . the bottom line? Mars, Inc. has inspiration, excitement, thrills, romance, a dash of satire—and is a good, fun read . . . .”—Analog

“The Hugo winner returns to his most popular subject: the quest for Mars.”—Publishers Weekly

“. . . escapist fantasy for rocket scientists and space engineers, those dreaming of these kinds of missions. Yet Bova’s story is rigorously realistic. . . . a fun read showing you do not need car chases or shootouts to deliver a fast-paced and exciting story."—Daily News of Galveston County

"Dickson at his best. . . . One of the notable science fiction novels of the year."—Booklist

"One of those rare books that holds your attention constantly. The suspense at some points is almost unbearable, leaving the reader breathless and glad the crisis has passed."—New Orleans Times-Picayune

"Dickson is among the best storytellers we have ever has...one of the finest makers that our field has ever known."—Poul Anderson

Ben Bova has written more than one hundred twenty futuristic novels and nonfiction books, and has been involved in science and high technology since the very beginnings of the space age. President Emeritus of the National Space Society and a past president of Science Fiction Writers of America, Bova received the Lifetime Achievement Award of the Arthur C. Clarke Foundation in 2005, "for fueling mankind's imagination regarding the wonders of outer space." His 2006 novel Titan received the John W. Campbell Memorial Award for best novel of the year. In 2008 he won the Robert A. Heinlein Award "for his outstanding body of work in the field of literature." Bova is a frequent commentator on radio and television and a widely-popular lecturer. His articles, opinion pieces and reviews have appeared in Scientific American, Nature, The New York Times, The Wall Street Journal, and many other newspapers and magazines. Earlier, he was an award-winning editor and an executive in the aerospace industry. Bova has taught science fiction at Harvard University and at the Hayden Planetarium in New York City, where he has also directed film courses. Bova currently lives in Florida.

Gordon R. Dickson (1923-2001) was one of the most prolific and popular science fiction writers of the 20th Century, frequently nominated for the Hugo and Nebula Awards and winning three Hugos and one Nebula. He also received the Jupiter, August Derleth, and Skylark Awards, and was inducted into the Science Fiction Hall of Fame. He published nearly fifty solo novels, as well as several collaborations with such SF masters as Poul Anderson, Ben Bova, Keith Laumer, and Harry Harrison, and over one hundred and fifty short stories, novelettes, and novellas. His most popular works were the novels and shorter pieces in the Childe cycle (which included the Dorsai stories). Also very popular was his Dragon series of fantasy novels, which began with the award-winning The Dragon and the George, and continued for a total of nine novels, and the humorous Hoka stories, co-authored with Poul Anderson, available from Baen Books.