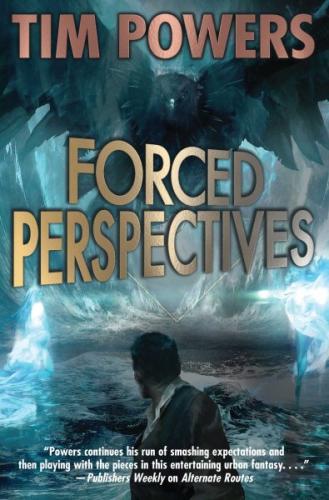 This is book number 2 in the Vickery and Castine series.

A BATTLE FOR THE SOUL OF HAUNTED LOS ANGELES

Why did Cecil B. DeMille really bury the Pharaoh’s Palace set after he filmed The Ten Commandments in 1923?

Fugitives Sebastian Vickery and Ingrid Castine find themselves plunged into the supernatural secrets of Los Angeles — from Satanic indie movies of the ‘60s, to the unqiet La Brea Tar Pits at midnight, to the haunted Sunken City off the coast of San Pedro . . . pursued by a Silicon Valley guru who is determined to incorporate their souls into the creation of a new and predatory World God.

About Forced Perspectives:
“One book I’ve been hugely excited about is Tim Powers’s latest, Forced Perspectives, set in the magical underbelly of modern-day Los Angeles. Powers may be the master of the secret history novel (and one of the originators of steampunk), but his recent work has really explored the history and magic of Tinseltown in a way no one else can.” —Lavie Tindhar, The Washington Post

“. . . playfully blends Egyptian mythology, alternate Los Angeles history, and modern technology. . . . A cast of unusual side characters. . .add color and complexity. This labyrinthine tale of the bizarre and fantastic will grip urban fantasy enthusiasts until the end.”—Publishers Weekly (starred review)

“The combination of the occult, Egyptian mythology, and old Hollywood is mesmerizing, entertaining, and at times terrifying . . . fast-paced, engaging, and quirky urban fantasy.”—Booklist (starred review)

"...moves at jet speed, along unpredictable paths, and resolves in a fully gratifying melee involving almost every major character, living or dead."—Locus Magazine

About prequel, Alternate Routes:
“Powers continues his run of smashing expectations and then playing with the pieces in this entertaining urban fantasy. . . . This calculated, frenetic novel ends with hope for redemption born from chaos. Powers’ work is recommended for urban fantasy fans who enjoy more than a dash of the bizarre.”—Publishers Weekly

"Tim Powers is always at the top of the list when folks ask about my favorite authors. His weaving mythology and legend into modern stories that revolve around secret histories of our most mundane landmarks never ever disappoints."—BoingBoing

"On Stranger Tides . . . was the inspiration for Monkey Island. If you read this book you can really see where Guybrush and LeChuck were -plagiarized- derived from, plus the heavy influence of voodoo in the game. . . .  [The book] had a lot of what made fantasy interesting . . .”—legendary game designer Ron Gilbert

“Powers's strengths [are] his originality, his action-crammed plots, and his ventures into the mysterious, dark, and supernatural.”—Los Angeles Times Book Review

"The fantasy novels of Tim Powers are nothing if not ambitious. . . .  Meticulously researched and intellectually adventurous, his novels rarely fail to be strange and wholly original."—San Francisco Chronicle