House of Assassins (Saga of the Forgotten Warrior #2) (Mass Market) 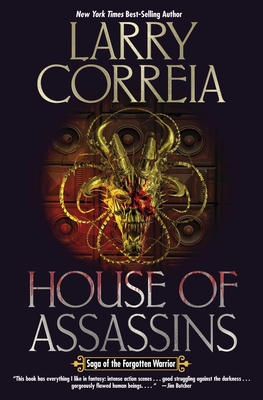 Ashok Vadal was once a member of the highest caste in all of Lok. As a Protector, he devoted his life to upholding the Law, rooting out those who still practiced the old ways and delivering swift justice with his ancestor blade Angruvadal. None was more merciless than he in stamping out the lingering belief in gods and demons among the casteless. His brutality was legendary and celebrated.

But soon Ashok learned that his life to that point had been a lie. He himself, senior member of the Protector Order, was casteless. He had been nothing more than an unwitting pawn in a political game. His world turned upside down and finding himself on the wrong side of the Law, he began a campaign of rebellion, war, and destruction unlike any Lok had ever seen.

Thera had been first daughter of Vane. A member of the Warrior Order, she had spent her life training for combat. Until a strange sight in the heavens appeared one day. Thera was struck by lighting and from that day forward she heard the Voice. A reluctant prophet with the power to see into the future, she fought alongside Ashok Vadal and his company of men known as the Sons of the Black Sword until a shapeshifting wizard with designs on her powers of precognition spirited her away. He holds her prisoner in the House of Assassins.

Ashok Vadal and the Sons of the Black Sword march to rescue Thera. With his sword Angruvadal, Ashok was unstoppable. But Angruvadal is gone, shattered to pieces on the demon possessed husk of a warrior. Now, Ashok must fight without the aid of the magic blade for the first time. Thera’s life depends on it.

But there is much more at risk in the continent of Lok. Strange forces are working behind the scenes. Ashok Vadal and the Sons of the Black Sword are caught up in a game they do not fully understand, with powerful forces allied against them.

Ashok no longer knows what to believe. He is beginning to think perhaps the gods really do exist.

If so, he’s warned them to stay out of his way.

They would do well to listen.

About House of Assassins:

“Correia piles on the intrigue, action, and cliffhangers in the invigorating second Saga of the Forgotten Warrior epic fantasy. . . . Correia also weaves in elements that question the value of belief and the cost of giving authority to those who find more profit in preying on the weak. . . . Brisk fight scenes, lively characters, and plenty of black humor continue to make this series a real pleasure.”—Publishers Weekly

"Correia is, above all, a storyteller, and he weaves a unique and entertaining tale. Without question, his action sequences pop on the page, his magic system has a nice wrinkle, and he has the foundations laid out for some excellent character growth as the series continues. . . . [A] definite hit."—Bookreporter

"Son of the Black Sword: Saga of the Forgotten Warrior tells of what happens after the war with the gods, when demons were cast out and fell to the world to nearly destroy these unstoppable beasts until the gods sent a hero to save them. Centuries have passed since this event and the people have regulated these events to legend. One Ashok has been chosen to be a protector with a powerful weapon in hand, uncovering those who still practice old ways and are potential dangers to the order - but when he discovers all his efforts have been based on a lie, everything's about to change. A powerful epic fantasy evolves into a solid, compelling read."—Midwest Book Review