The Shaman of Karres (Witches of Karres #4) (Hardcover) 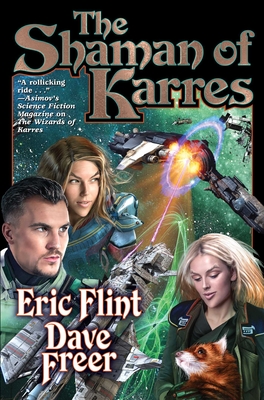 This is book number 4 in the Witches of Karres series.

First, he became the mortal enemy of his fiancée, his home planet, the Empire—and even the Worm World, the darkest threat to mankind in all of space. All because he helped rescue three slave children from their masters. Of course, these three young women were the universally feared witches of Karres—but how was he to know that?!

And after he defeated the Worm World (with the help of the witches, of course), the Empress herself had sent him on a secret mission to stop a nanite plague that was raging across the galaxy. But an enemy had somehow convinced the Imperial Fleet that he was actually a wanted criminal, so after a battle leaving his ship in urgent need of repairs, Puasert and the witches of Karres joined an interstellar traveling circus in order to save the galaxy.

Now Pausert and the witches of Karres roam the spaceways again, this time dealing with a slaver-culture that somehow makes slaves happy to be in servitude, and a quest for a long-lost alien pet, during which the youngest witch, The Leewit, begins to come to her full powers as a healer—and of course generates chaos in her wake.

For Pausert, it’s all in a day’s work. But would it be too much to ask for a vacation?

About The Shaman of Karres:
“This latest adventure of Pausert and the Witches is full of all the whimsy, derring-do, and absurd hijinks that you’d expect. I dare any reader to get through ten pages without smiling.”—Analog

"Matches Schmitz's narrative style and high standard of humor, imagination, and absurdity. . . . Fans of humorous science fiction will enjoy this outing.”—School Library Journal on The Wizard of Karres

About All the Plagues of Hell by Eric Flint & Dave Freer:
“. . . a compelling tale of political, military, and magical conflict . . .”—Booklist

About Eric Flint:
“A master of the genre.”—Booklist

“An SF author of particular note . . . one who can entertain and edify in equal, and major, measure.” —Publishers Weekly