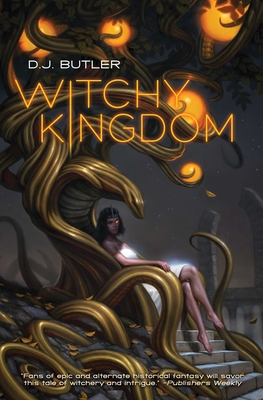 This is book number 3 in the Witchy War series.

SEASON OF THE WITCH

An encounter with her father’s goddess has not turned out to be the end for Sarah Elytharias Penn. Now, with the Imperial fist teightend around her city and the beastkind of the Heron King ravaging across the river, she must pull off a feat her powerful father never accomplished—access the power of the Serpent Throne itself. To complicate her efforts, Cahokia’s Metropolitan, a beloved and charismatic priest who despises the goddess as a demon, returns from a long pilgrimage and attempts to finalize the Wisdom-eradicating reform that dogged Sarah’s father when he was king.

Meanwhile, Sarah’s brother Nathaniel and her brilliant but erratic servant Jacob Hop find their steps dogged by the Emperor’s Machiavel, Temple Franklin, as they hunt in New Amsterdam for the third Elytharias sibling. Isaiah Wilkes, having failed to awaken the Emperor by reminding him of his esoteric obligations, now travels north in disguise to seek other allies to stand against the destroying storm of the reign of Simon Sword. Chigozie Ukwu, the Shepherd of the Still Waters, finds his peaceful flock threatened and pressed into a dangerous mission in the service of Cahokia’s wild sister city Zomas, while his brother, the Vodun houngan Etienne Ukwu, pushes toward a final showdown with the mameluke assassins of the Chevalier of New Orleans.

"Witchy Eye is a brilliant blend of historical acumen and imagination, a tour-de-force that is at once full of surprises and ultimately heart-warming. This is your chance to discover one of the finest new stars writing today!"–David Farland