In the Palace of Shadow and Joy (Paperback) 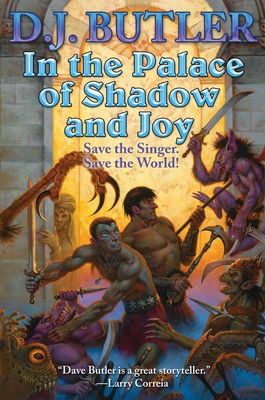 “BARD DESPERATE FOR APPRENTICE AND ROGUE WITH SIDELINE IN INSURANCE SEEK WORK. PREFERABLY AS GOOD GUYS.”

Indrajit Twang is the four hundred twenty-seventh epic poet of his people, the only person alive to carry their entire epic history and mythology in his head. His people are dwindling in number, and if he can’t find a successor in the great city of Kish, their story will disappear with them.

Fix grew up a foundling on the ancient streets of Kish and is making his living as a mercenary. The woman he loves married someone else, and Fix has turned to buying and selling risk on the black market—but is he trying to impress her, or prove something to himself?

Indrajit and Fix have been hired by a powerful risk-merchant to protect the life of opera star Ilsa without Peer for the duration of a risk contract he’s taken on. When an attempt is made on Ilsa’s life, Indrajit and Fix find themselves hunted by multiple mercenary squads and targeted by some of the most powerful men in Kish. Will they be able to save themselves, not to mention protect Ilsa, in the Palace of Shadow and Joy?

Praise for Witchy Winter:
“Butler follows Witchy Eye with a satisfying second tale of a magic-filled early America. . . . Deep and old magic influences both places and characters, and the story is tightly focused on the determined Sarah. . . . Fans of epic and alternate historical fantasy will savor this tale of witchery and intrigue.”—Publishers Weekly

“Excellent book. I am impressed by the creativity and the depth of the worldbuilding. Dave Butler is a great storyteller.”—Larry Correia

"Witchy Eye is a brilliant blend of historical acumen and imagination, a tour-de-force that is at once full of surprises and ultimately heart-warming. This is your chance to discover one of the finest new stars writing today!" —David Farland

D.J. (“Dave”) Butler grew up in swamps, deserts, and mountains. After messing around for years with the practice of law, he finally got serious and turned to his lifelong passion of storytelling. He now writes adventure stories for readers of all ages, plays guitar, and spends as much time as he can with his family. He is the author of City of the Saints, Rock Band Fights Evil, Space Eldritch, and Crecheling from Wordfire Press, and Witchy Eye, Witchy Winter, and Witchy Kingdom from Baen Books. Read more about Dave and his writing at http://davidjohnbutler.com, and follow him on Twitter: @davidjohnbutler.