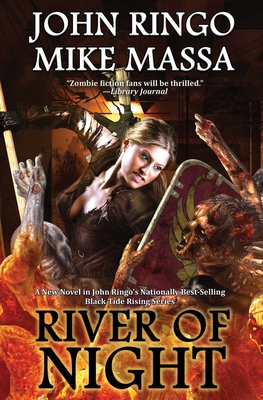 This is book number 8 in the Black Tide Rising series.

THROUGH THE RAGING PLAGUE

At Tom Smith’s previous gig, he was the global managing director for security of an international bank. Then the zombies emerged. And New York burned. His plan to the save the city long enough to find a cure for the zombie virus didn’t survived a bloody scrimmage between angry cops, cunning gangsters, and rapacious officials.

Tom and a few trusted allies were able to stay one step ahead and barely escape. Now they seek refuge in the bank's prepared evacuation retreat in the Cumberland Valley of Tennessee. But between Tom’s people and relative safety are hundreds of miles of clogged roads, burnt-out towns and howling mobs of infected humans who know only hunger. Plus there are gangs of the non-infected who would like nothing more than to defeat an enslave any weary travelers who happen their way.

And finally, if Tom does pull off the journey, no one is sure how they are going to re-start civilization. But even for that, Tom Smith has the spark of an idea. And, as always, the beginnings of a plan. Which he is certain may change completely when the enemy strikes.

"This anthology broadens Ringo’s Black Tide world, serving up doses of humanity amid the ravenous afflicted. Comedy has a place in this harsh reality, and these stories stir adventure and emotion at a frantic clip throughout. Zombie fiction fans will be thrilled."—Library Journal

Mike Massa has lived an adventurous life including stints as a university researcher, a tech entrepreneur, an investment banker and a U.S. Navy officer (1130). In addition to the usual military deployments, he has lived outside the US for several years as a civilian, mostly in South America and Europe. Newly published, Mike is married and enjoys the challenges of three sons and a growing cohort of grandsons all of whom check daily to see if today is the day they can pull down the old lion. Not yet . . .