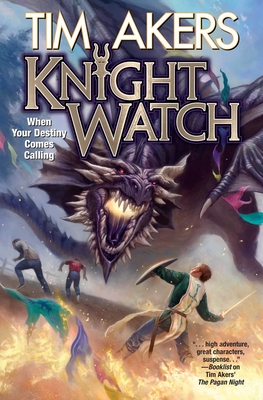 MEN IN BLACK AT THE REN FAIRE!

John Rast went to the Ren Faire looking for a fight. Well, a simulated fight, with blunt swords and safety equipment. But when his final opponent turns into a living, fire-breathing dragon, John finds himself in the fight of his life. It’s John or nothing stopping a disaster in its tracks—and the only real weapon at hand is his mom’s Volvo. So John decides to let it roll . . .

And that's when destiny comes to call. John is spirited away to the well-hidden base of Knight Watch, the organization that stands between humanity and the real nasties the rest of the world doesn’t know about.

Knight Watch would be John’s dream job—except for the storm goddess that destroys his parents’ house, the abandoned mall replete with too much dead, and the Fetch that aims to make John’s domain a final resting place. All this has John’s putative allies in the Knight Watch worried that John is the one bringing bad things into multiple worlds. John and his reluctant teammates have to figure out who, or what, is pulling the strings before all of Knight Watch falls prey to a well-concealed puppetmaster and far worse things enter this world.

About Knight's Watch:
“Buckle up and get ready for a fun ride. Tim Akers delivers an epic story about weekend ren fair warriors versus actual monsters. Best fictional use of a Volvo station wagon ever.”—Larry Correia

About Tim Akers:
“A must for all epic fantasy fans.”—Starburst

“Take a bit of fantasy, mix in the horror of the demonic, and put in some top-notch writing and you’ll have Akers’ latest novel.”—Hellnotes

Tim Akers grew up in rural North Carolina, the last in a long line of Scottish bankers, newspaper editors, and tourist-trap barons. He moved to Chicago to pursue his passion for apocalyptic winters, tornadic summers, and traffic. He stayed for the hot dogs.