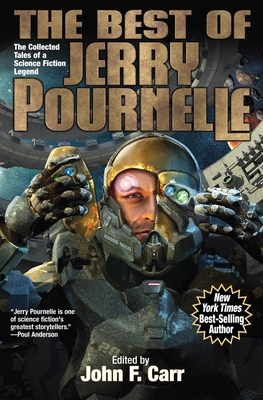 NATIONAL BESTSELLER. SHORT STORIES BY A MASTER OF SCIENCE FICTION! Includes more than a dozen stories by SF legend Jerry Pournelle, and remembrances by Pournelle collaborators and admirers.

THE GRAND MASTER OF HUGE IDEAS AND STAR-SPANNING WONDER

For half a century, Jerry Pournelle’s name has been synonymous with hard-hitting, idea-driven, wonder-inducing science fiction. His Falkenberg’s Legion stories and Janissaries series helped define the military SF genre, his CoDominium universe is an SF standard for worldbuilding and future history, and his novels with frequent collaborator Larry Niven are some of the most important works science fiction has ever seen—and the best-selling and most read.

Now, for the first time, Pournelle’s best short work is collected together in a single volume. Here are more than a dozen short stories, each with a new introduction by editor and long-time Pournelle assistant John F. Carr. The book also includes a cornucopia of Pournelle’s rampantly imaginative and compelling essays, as well as great remembrances by Pournelle collaborators Larry Niven, S.M. Stirling, and more!

About The Best of Jerry Pournelle:
“. . . showcases a huge swath of [Pournelle’s] work, including much that were previously unpublished. . . . Fans of Pournelle will love this collection of stories, essays, and remembrances, and others will be glad to discover him.”—Booklist

"This thorough collection of short works from the late Pournelle (1933–2017), interspersed with remembrances of his life from colleagues and collaborators, is an engrossing retrospective of the half-century career of a defining author of the military sci-fi genre. . . . Lovers of classic military speculative fiction will enjoy this walk back through a brilliant career."—Publishers Weekly

"[a] must-have for Pournelle fans."—The Daily News of Galveston County

About Jerry Pournelle:
"Possibly the greatest science fiction novel I have ever read."—Robert A. Heinlein on The Mote in God's Eye by Larry Niven and Jerry Pournelle

Jerry Pournelle was a master of military science fiction. He is the author of the series of novels about John Christian Falkenberg and his legion of interstellar mercenaries, as well as many other works, including Janissaries, Exiles to Glory, High Justice, King David's Spaceship, and Starswarm. With Larry Niven, he collaborated on a string of best-selling novels, including Lucifer's Hammer, The Mote in God's Eye, Footfall, and the Legacy of Heorot series with Niven and Barnes. He held advanced degrees in psychology, statistics, engineering, and political science, and was actively involved professionally in all these fields.