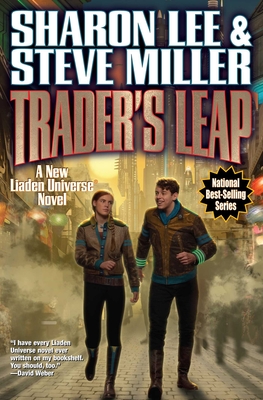 This is book number 23 in the Liaden Universe® series.

The only bridge between past and future is a leap of faith.

Pursued by enemies, exiled Liaden clan Korval is settling into a new base on backworld Surebleak. Moving is expensive, as is war, and Korval is strapped for cash. Delm Korval has therefore instructed Master Trader Shan yos'Galan to design and implement new trade routes, quickly.

But this is no easy task. Dutiful Passage is targeted by Korval's enemies, denied docking at respectable ports, and cheated at those less respectable. Struggling to recuperate from an attack on his life, while managing daughter Padi’s emerging psychic talents, Shan is running out of options—and time. His quest to establish the all-important trade route puts him at odds with his lifemate, while doubting crew desert the ship. Facing the prospect of failure, Shan accepts the assistance of chancy allies and turns the Passage toward a port only just emerging from Rostov's Dust and awash with strange energies.

Without trade, Clan Korval will starve. Will a trader's leap of faith save everything—or doom all?

"I have every Liaden Universe novel ever written on my bookshelf. You should, too."—David Weber

“[D]elightful stories of adventure and romance set in a far future . . . space opera milieu. It’s all a rather heady mix of Gordon R. Dickson, the Forsythe Saga, and Victoria Holt, with Lee and Miller’s own unique touches making it all sparkle and sizzle. Anyone whose taste runs toward SF in the true romantic tradition can’t help but like the Liaden Universe.”—Analog

“[T]he many fans of the Liaden universe will welcome the latest . . . continuing young pilot Theo Waitley’s adventures.”—Booklist on Saltation