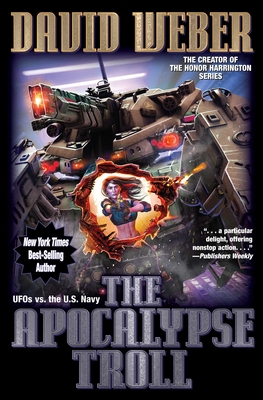 RINGSIDE FOR THE APOCALYPSE

There he was in his sailboat in the middle of the Atlantic, all alone and loving it. Well, there was a US Navy carrier group on his southern horizon, but Richard Ashton was a Navy guy himself, so he didn't mind. Then came the UFOs, hurtling in from the Outer Black to overfly the carriers at Mach 17. Their impossible aerobatics were bad enough—but then they started shooting at each other. And at the Navy. With nukes. Little ones at first, but winding up with a 500 megatonner at 90 miles that fried every piece of electronics within line of sight.

Ashton thought he was just a ringside observer to these now over-the-horizon events. But when a crippled alien lifeboat came drifting down and homed in on his sailboat, he suddenly found his hands full of an unconscious, critically wounded, and impossibly human alien warrior who also happened to be a gorgeous female.

That's when things got interesting.

“It's a rollicking fun tale that's impossible to put down.” —Philadelphia Weekly Press

About David Weber:
“[A] balanced mix of interstellar intrigue, counterespionage, and epic fleet action . . . with all the hard- and software details and tactical proficiency that Weber delivers like no one else; along with a large cast of well-developed, believable characters, giving each clash of fleets emotional weight.” —Booklist

“[M]oves . . . as inexorably as the Star Kingdom’s Grand Fleet, commanded by series protagonist Honor Harrington. . . . Weber is the Tom Clancy of science fiction. . . . His fans will relish this latest installment. . . .” —Publishers Weekly

“This entry is just as exciting as Weber’s initial offering. . . . The result is a fast-paced and action-packed story that follows [our characters] as they move from reaction to command of the situation. Weber builds Shadow of Freedom to an exciting and unexpected climax.” —The Galveston County Daily News

“Weber combines realistic, engaging characters with intelligent technological projection and a deep understanding of military bureaucracy in this long-awaited Honor Harrington novel. . . . Fans of this venerable space opera will rejoice to see Honor back in action.” —Publishers Weekly

“This latest Honor Harrington novel brings the saga to another crucial turning point. . . . Readers may feel confident that they will be Honored many more times and enjoy it every time.” —Booklist