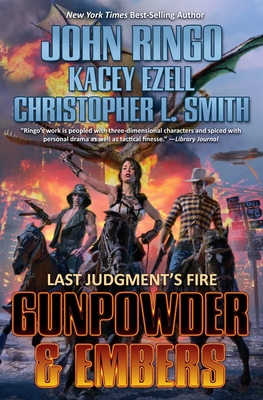 IN THE SMOKING RUINS OF OUR WORLD, WILL THE STRUGGLE FOR YESTERDAY'S TECHNOLOGY SPARK TOMORROW'S GLOBAL WAR?

WAR IN THE SMOKING RUINS OF TOMORROW!

Thirty years ago, the world ended. Giant electrovoric ants and pterodons came through a rift in space-time, millions of humans died, and that was that.Human ingenuity has provided some creative workarounds to life without electricity and with giant homicidal ants, but most people merely get by at subsistence level.

For Chuck Gibson, the simple life of a rancher was enough. But then he met a mysterious dying stranger, and now he’s on the road of destiny across America accompanied by a warrior monk, a beautiful dragon tamer, a runaway cultist, and a mystic drunken lecher—all searching for the key to reclaiming humanity's past—and future.

About Gunpowder and Embers:
“. . . a post-dystopian romp across an America both degenerating and crushed. . . . There are dragons both wild and tame, betrayals of great magnitude, heart-stopping action. Great fun.”—The Seattle Book Review

About The Valley of Shadows by John Ringo:
". . . fast-paced . . .  building to an exciting climax . . . Ringo and Massa have written an end-of-the-world novel that is unconventional and entertaining."—Daily News of Galveston County

About the work of Kacey Ezell:
"Gritty, dark and damp. Much like the war itself."—Michael Z. Williamson, best-selling author of A Long Time Until Now

Kacey Ezell is an active-duty USAF helicopter pilot who also writes sci-fi/fantasy/alt history/horror fiction. Her first novel was a Dragon Award finalist in 2018, and her stories have been featured in Baen’s Year’s Best Military and Adventure Science Fiction compilation in 2017 and 2018. In 2018, her story “Family over Blood” won the 2018 Year’s Best Military and Adventure Science Fiction Reader’s Choice Award. She writes for Baen and Chris Kennedy Publishing.

A native Texan by birth (if not geography), Christopher L. Smith moved “home” as soon as he could. While there, he also met a wonderful lady who somehow found him to be funny, charming, and worth marrying. Chris began writing fiction in 2012. His short stories can be found in the anthologies Black Tide Rising, Forged in Blood, and The Good, The Bad, and The Merc, among others. He has co-written two novels, Kraken Mare, with Jason Cordova, and Gunpowder & Embers with John Ringo and Kacey Ezell. A solo urban fantasy novel is currently under construction. His cats allow his family and three dogs to reside with them outside of San Antonio.