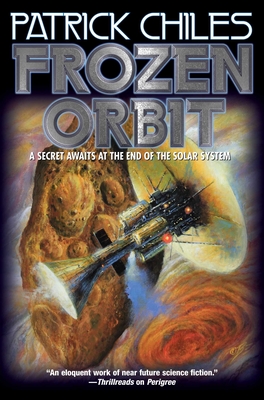 THE BEGINNING OF LIFE AWAITS AT THE END OF THE SOLAR SYSTEM.

A FROZEN ANSWER AT THE EDGE OF PLANETARY SPACE

Set to embark on NASA’s first expedition to the outer planets, the crew of the spacecraft Magellan learns someone else has beaten them by a few decades: a top-secret Soviet project codenamed Arkangel.

Now during their long race to the Kuiper Belt, astronauts Jack Templeton and Traci Keene must unwind a decades-old mystery buried in the pages of a dead cosmonaut’s journal. The solution will challenge their beliefs about the nature of humanity and force the astronauts to confront the question of existence itself. And the final answer lies at the edge of the Solar System, waiting to change everything.

About Frozen Orbit:
“. . . hard science fiction and an entertaining and gripping plot. . . . Chiles nails the atmosphere of a NASA-run human spaceflight mission in the 21st century, the jargon of the mission controllers and astronauts, and the bureaucratic infighting characterizing today’s NASA. . . . The scenario and background . . . are the scaffolding on which a gripping tale is formed. Readers experience the wonder the astronauts feel on a remarkable voyage, groan as the Earth goes crazy as the expedition progresses, and thrill to a powerful conclusion . . . science fiction at its best.”—The Galveston County Daily News

"The story moves quickly with elements of both a spy thriller and a space race...Frozen Orbit could make for an impressive movie, one that would stand with greats such as Contact or Interstellar."—Booklist

About Farside by Patrick Chiles:
“The situations are realistic, the characters interesting, the perils harrowing, and the stakes could not be higher."— John Walker, Ricochet.com

“. . . a fast-paced and exciting story which bounces between the borders of technological thriller and science fiction. . . . an impressive effort."—The Galveston County Daily News