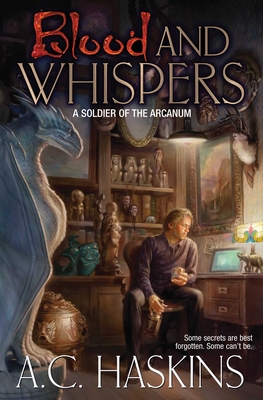 THE MOST DANGEROUS WEAPON IS A PAST SCORNED

Thomas Quinn is a sorcerer haunted by the memories of the things he's done over centuries of service to the Arcanum. From battling djinn to killing demigods and dragons, the scars and nightmares have left him a broken man. He has long retired from that life, running an occult shop in Philadelphia for the past several decades, wanting nothing more than to be left alone with his books and his whiskey and his shame.

But when two detectives come to his door asking about a brutal ritual murder in his city, Quinn must reluctantly take up the mantle of a Sorcerer of the Arcanum once more, and face down those who would threaten the fragile peace between the human and magical worlds. His investigation takes him from the streets of Philadelphia to the court of a Faerie King as he races to stop the apocalypse.

Thomas Quinn was prepared to fight rogue sorcerers and Fae monsters. But the greatest threat he faces may be his own inner demons. . . .

A.C. Haskins is a former Armored Cavalry Officer and combat veteran turned economist and business strategist (and occasional defensive firearm instructor). He has a lifelong love of speculative fiction, having written his first science fiction novel as a class project in the eleventh grade. His interests include (but are not limited to) ancient and medieval history, mythology, applied violence studies, tabletop gaming, and theoretical economics. He lives in Michigan with his wife, two cats, and a dog.