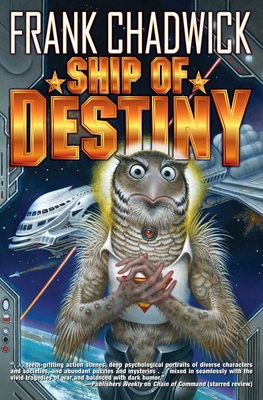 SURROUNDED BY DEATH, THE SECRET OF IMMORTALITY IS WITHIN REACH

When a mysterious alien probe materializes from Jump Space and remotely reprograms USS Cam Ranh Bay’s star drive, naval reserve officer Sam Bitka and his crew begin an involuntary voyage that takes them three thousand light years out of known space and into the heart of an ancient, unknown civilization.

Now Sam and his crew must elude capture, find some means of reprogramming their own star drive, and then return with the news of a powerful new civilization bent on their destruction. But the crew of the Bay may also be carrying a secret that would change life in the galaxy forever: the path to immortality.


Praise for Chain of Command:

“Chadwick’s heavy hitter succeeds at teeth-gritting action scenes, deep psychological portraits of diverse characters and societies, and abundant puzzles and mysteries. All . . . mixed in seamlessly with the vivid tragedies of war and balanced with dark humor.”—Publishers Weekly, starred review

". . . strong characterization and the briskness of the plot should please. Fans of military sf and of Chadwick, in particular, should give it a look."—Booklist

"Chain of Command is very smartly put together . . . Chadwick gets the details right, whether he's talking about the effects of prolonged weightlessness or the intricacies of geo and interstellar politics and economics . . . a solid piece of Mil-SF writing that pulls from many historical sources and manages to convey a lot of what the Surface Navy is like. . . . It isn't the steel hulls that make the navy tough, it's the sailors that crew them."—SFRevu

About Come the Revolution:
“[A]dventure, family secrets and humor. . . . The plot is as hard as the science Chadwick uses. . . . [E]ngages readers. First-rate science fiction; it moves at a fast pace throughout.”—The Galveston County Daily News

"Chadwick offers an exciting military SF story set on the Varoki home planet of Hazz’Akato in his follow up to How Dark the World Becomes . . . Chadwick, a leading designer of military and science-fiction board- and role-playing games, knows his way around a battlefield . . . eccentric  cohorts are entertaining, and a few surprises guarantee that readers will be seeing more of this series."—Booklist