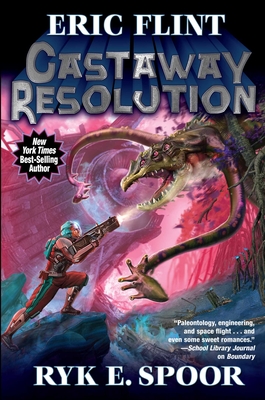 This is book number 6 in the Boundary series.

THE CASTAWAY ADVENTURE CONTINUES! A FAMILY LEARNS HOW TO SURVIVE AND THRIVE ON AN ALIEN PLANET

IT'S NOT PARANOIA IF THEY REALLY ARE OUT TO GET YOU

The Kimei family and a second group of castaways, led by the redoubtable Sergeant Campbell, have finally joined forces, landing on the bizarre planet Lincoln, whose “continents” are actually huge floating coral colonies inhabited by even stranger lifeforms. They have survived crash-landings, venom-filled bites, disease, and even the destruction—and consumption!—of one of their floating island homes. They have learned to live, even to prosper, in this strange new place.

Meanwhile, out among the stars, Lieutenant Susan Fisher pieces together the mystery of what happened to the starship Outward Initiative and begins to believe that, just possibly, some of the survivors have escaped to a mysterious and unsuspected star system. But Fisher’s preparations and the resourcefulness of the castaways may not be enough. Because the planet Lincoln is far from done with them yet.

Praise for previous books in this series:

“The whole crew from Flint and Spoor's Boundary are back. . . . Tensions run high throughout the Ceres mission . . . a fine choice for any collection.”—Publishers Weekly on Threshold

“[P]aleontology, engineering, and space flight, puzzles in linguistics, biology, physics, and evolution further the story, as well as wacky humor, academic rivalries, and even some sweet romances.”—School Library Journal on Boundary