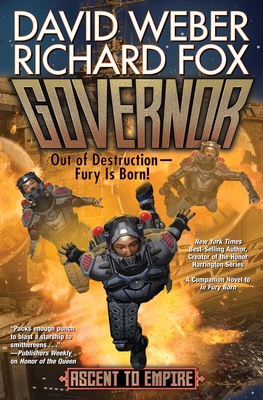 For more than fifty years, the Terran Federation and the Terran League have been killing one another. The death toll has climbed ever higher, year after year, with no end in sight. But the members of the Five Hundred, the social elite of the Republic's Heart Worlds, don't care.

Their star systems are light-years from any threat of attack. Their children are sheltered from the “mandatory service” that falls so heavily on the Fringe Worlds' backs. Their trade connections with the Rishathan Sphere bring them wealth and influence. And their contracts to build ships, fighters, missiles, and all the other sinews of war have made them the wealthiest human beings in the history of the galaxy.

Rear Admiral Terrence Murphy is a Heart Worlder. His family is part of the Five Hundred. His wife is the daughter of one of the Five Hundred's wealthiest, most powerful industrialists. His sons and his daughter can easily avoid military service, and political power is his for the taking. There is no end to how high he can rise in the Republic's power structure.

All he has to do is successfully complete a risk-free military "governorship" in the backwater Fringe System of New Dublin without rocking the boat. Without dredging up any lunatic Fringe conspiracy theories. Without undercutting the Five Hundred's stranglehold on wealth and power.

But the people sending him to New Dublin have miscalculated, because Terrence Murphy is a man who believes in honor. Who believes in duty—in common decency and responsibility. Who believes there are dark and dangerous secrets behind the façade of what "everyone knows."

Terrence Murphy intends to meet those responsibilities and unearth those secrets, and he doesn't much care what the Five Hundred want.

He intends to put a stop to the killing.

Terrence Murphy is coming for whoever has orchestrated fifty-six years of bloodshed and slaughter, and Hell itself is coming with him.

A new novel in the world of In Fury Born, one of David Weber's most celebrated novels.

Richard Fox is the winner of the 2017 Dragon Award for Best Military Science Fiction or Fantasy novel. He's best known for The Ember War Saga, a military science fiction and space opera series.

His writing draws extensively from his experiences in the United States Army, where he served two combat tours in Iraq and was awarded the Bronze Star, Combat Action Badge and Presidential Unit Citation.

He lives in fabulous Las Vegas with his incredible wife and three boys, amazing children bent on anarchy.

Subscribe to Richard's spam free email list and get free short stories set during the Ember War Saga (and more as they become available) at: