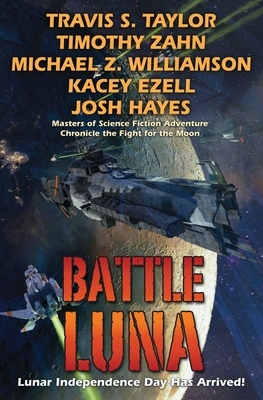 THE EPIC FIGHT FOR INDEPENDENCE ON OUR MOON HAS BEGUN!

The Lunar colony is a mining colony with only internal security capabilities. Nobody had even considered that there might soon arise a need to defend the colony from the Earth! But that day has come. Something has been uncovered on the Moon. Something important. Something . . . alien.

The Lunar colonists perceive this great discovery as their own. Finders keepers and possession being nine-tenths of the law is how things are on the Moon. But as far as the governments of the Earth are concerned, they paid for everything on the Moon, so it belongs to them.

There is only one solution: turn Luna into a battlefield!

Dr. Travis S. Taylor has worked on various programs for the Department of Defense and NASA for the past twenty years. His expertise includes advanced propulsion concepts, very large space telescopes, space-based beamed-energy systems, future combat technologies, and next-generation space launch concepts. Taylor is also the author of pulse-pounding, cutting-edge science fiction novels, including the highly popular One Day on Mars, Tau Ceti Agenda, and the groundbreaking Warp Speed series. He is a regular on the History Channel’s Life After People and The Universe series, and is one of the the stars of the History Channel's The Secret of Skinwalker Ranch.

Timothy Zahn is a Hugo Award winner and the author of the New York Times #1 bestseller Heir to the Empire, as well as the best-selling Star Wars: Thrawn series of novels. Born in Chicago, he earned a B.S. in physics from Michigan State University and an M.S. in physics from the University of Illinois. He sold his first story to Analog in 1978, and immediately attracted attention as a new writer of science fiction based on real, cutting-edge science. Baen published his popular Cobra trilogy in one volume. His other popular series include the Conqueror and Dragonback novels. With David Weber and Thomas Pope, he is the author of novels A Call to Arms, A Call to Vengeancen and A Call to Duty. Zahn has written more than 50 novels, including the recent Cobra Rebellion series entries Cobra Outlaw and Cobra Traitor.

Kacey Ezell is an active-duty USAF helicopter pilot who also writes sci-fi/fantasy/alt history/horror fiction. Her first novel was a Dragon Award finalist in 2018, and her stories have been featured in Baen’s Year’s Best Military and Adventure Science Fiction compilation in 2017 and 2018. In 2018, her story “Family over Blood” won the 2018 Year’s Best Military and Adventure Science Fiction Reader’s Choice Award. She writes for Baen and Chris Kennedy Publishing.