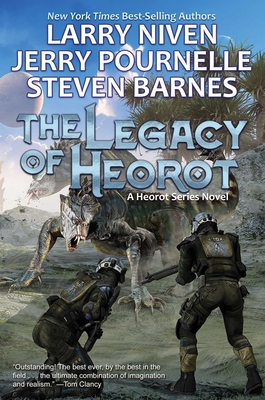 This is book number 1 in the Heorot Series series.

STRANGERS IN A STRANGE LAND

The two hundred colonists on board the Geographic have spent a century in cold sleep to arrive here: Avalon, a lush, verdant planet light-years from Earth. They hope to establish a permanent colony, and Avalon seems the perfect place. And so they set about planting and building.

But their very presence has upset the ecology of Avalon. Soon an implacable predator stalks them, picking them off one by one. In order to defeat this alien enemy, they must reevaluate everything they think they know about Avalon, and uncover the planet’s dark secrets.

About The Legacy of Heorot:

“Page-turning action and suspense, good characterization and convincing setting . . . may be the best thing any of those authors has written.”—The Denver Post

“Few writers have a finer pedigree than those here. . . . As one might suspect Beowulf's Children is seamless . . . absorbing, substantial . . . masterful novel.”—Los Angeles Times

“Possibly the greatest science fiction novel I have ever read.”—Robert A. Heinlein on The Mote in God's Eye

“Larry Niven’s RINGWORLD remains one of the all-time classic travelogues of science fiction — a new and amazing world and fantastic companions.”—Greg Bear

“Jerry Pournelle is one of science fiction’s greatest storytellers.”—Poul Anderson

“On the cover . . . is the claim ‘No. 1 Adventure Novel of the Year.’ And well it might be.”—Milwaukee Journal on Janissaries