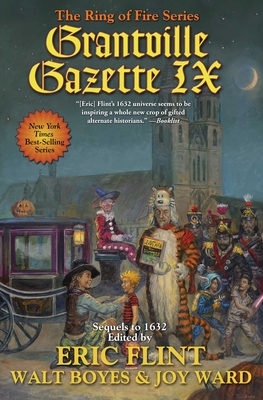 This is book number 32 in the Ring of Fire series.

The most popular alternate history series of all continues. When a cosmic disturbance hurls your town from twentieth-century West Virginia back to seventeenth-century Europe—and into the middle of the Thirty Years War—you have to adapt to survive. And the natives of that time period, faced with American technology and politics, need to be equally adaptable. Here’s a generous helping of more stories of Grantville, the American town lost in time, and its impact on the people and societies of a tumultuous age.

“[Eric Flint] can entertain and edify in equal, and major, measure.”—Publishers Weekly

Walt Boyes is the editor of the Industrial Automation INSIDER magazine, the editor of The Grantville Gazette, a member of the 1632 universe editorial board, formerly editor of Control magazine and associate editor of Jim Baen's Universe. Along with Joy Ward, Walt is Co-Editor of Eric Flint's Ring of Fire Press. Walt is an active member of SFWA.

Joy Ward is the author of one novel. She has several stories in print, in magazines, and in anthologies, and has also conducted interviews, both written and video, for other publications. Her credits include Mother Jones, On the Issues, Commerce, and Governmental Review.