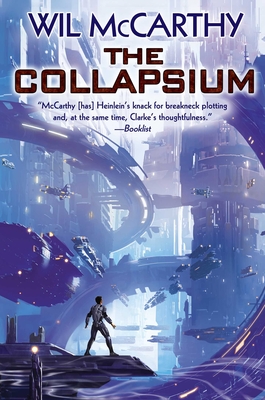 This is book number 1 in the Queendom of Sol series.

SAVE THE SOLAR SYSTEM FROM THE ULTIMATE COLLAPSE

In the eighth decade of the Queendom of Sol, three commodities rule the day. The first is wellstone, a form of programmable matter capable of emulating almost any substance. The second is collapsium, a deadly crystal composed of miniature black holes, vital for the transmission of information and matter—including humans—throughout the Solar System. The third is the bitter rivalry between Her Majesty's top scientists.

Bruno de Towaji, famed lover and statesman, dreams of building an arc de fin, an almost mythical device capable of probing the farthest reaches of spacetime. Marlon Sykes, de Towaji's rival in both love and science, is meanwhile hard at work on a vast telecommunications project whose first step is the construction of a ring of collapsium around the Sun. But when a ruthless saboteur attacks the Ring Collapsiter and sends it falling into the Sun, the two scientists must put aside personal animosity and combine their prodigious intellects to prevent the destruction of the Solar System—and every living thing within it.

About The Collapsium:
“Ingenious and witty . . . as if Terry Pratchett at his zaniest and Larry Niven at his best had collaborated.”—Booklist

"Fresh and imaginative.  From a plausible yet startling invention, McCarthy follows the logical lines of sight, building in parallel the technological and societal innovations."—Science Fiction Weekly

"The future as McCarthy sees it is a wondrous place." —Publishers Weekly

"[McCarthy] studs his narrative with far-out scientific concepts. . . . He certainly has a sense of humor."—The New York Times