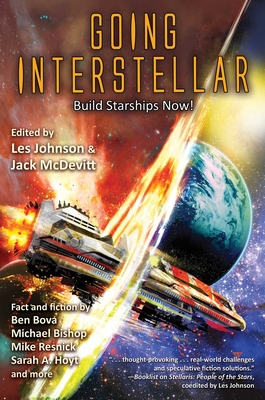 ONE THING WE CAN ALL AGREE ON: HARD SF AT ITS BEST. A collection of tales by an all-star assortment of award winning authors including Ben Bova, Mike Resnick, Jack McDevitt, Michael Bishop, Sarah A. Hoyt, and more, together with essays on high technology by space scientists and engineers—all taking on new methods of star travel.

Some humans may be content staying in one place, but many of us are curious about what’s beyond the next village, the next ocean, the next horizon. Are there others like us out there? How will we reach them? Others are concerned with the survival of the species. It may be that we have to get out of Dodge before the lights go out on Earth. How can we accomplish this? Wonderful questions. Now get ready for some answers.

Here is the science behind interstellar propulsion: reports from top tier scientists and engineers on starflight propulsion techniques that use only means and methods that we currently know are scientifically possible. Here are in-depth essays on antimatter containment, solar sails, and fusion propulsion. And the human consequences? Here is speculation by a magnificent array of award-winning SF writers on what an interstellar voyage might look like, might feel like—might be like. It’s an all-star cast abounding with Hugo and Nebula award winners: Ben Bova, Mike Resnick, Jack McDevitt, Michael Bishop, Sarah A. Hoyt, and more.

About Stellaris: People of the Stars, coedited by Les Johnson:
“[A] thought-provoking look at a selection of real-world challenges and speculative fiction solutions. . . . Readers will enjoy this collection that is as educational as it is entertaining.”—Booklist

About Mission to Methone, by Les Johnson:
“The spirit of Arthur C. Clarke and his contemporaries is alive and well in Johnson’s old-fashioned first-contact novel, set in 2068. . . . includes plenty of realistic detail and puts fun new spins on familiar alien concepts. . . . There’s a great deal here for fans of early hard SF.”—Publishers Weekly

About Rescue Mode, by Ben Bova and Les Johnson:
“. . . a suspenseful and compelling narrative of the first human spaceflight to Mars.”—Booklist

“‘Why read Jack McDevitt?’ The question should be: ‘Who among us is such a slow pony that s/he isn’t reading McDevitt?’”—Harlan Ellison

Les Johnson is a physicist and author. With Ben Bova, he is the coauthor of Rescue Mode, and with Travis S. Taylor, he is the coauthor of Back to the Moon and On to the Asteroid. He is the coeditor of the science/science fiction collection Going Interstellar. His first solo novel was Mission to Methone. He was technical consultant for the movies Europa Report and Lost in Space and has appeared on the Discovery Channel series Physics of the Impossible in the “How to Build a Starship” episode. He has also appeared in three episodes of the Science Channel series Exodus Earth. By day, he serves as Solar Sail Principal Investigator of NASA’s first interplanetary solar sail mission and leads research on various other advanced space propulsion technologies at the George C. Marshall Space Flight Center in Huntsville, Alabama. His latestest solar sail project was recently funded for 65 million dollars.

Jack McDevitt is the Nebula Award–winning author of The Academy series, including The Long Sunset. He attended La Salle University, then joined the Navy, drove a cab, became an English teacher, took a customs inspector’s job on the northern border, and didn’t write another word for a quarter-century. He received a master’s degree in literature from Wesleyan University in 1971. He returned to writing when his wife, Maureen, encouraged him to try his hand at it in 1980. Along with winning the Nebula Award in 2006, he has also been nominated for the Hugo Award, the Nebula Award, the Arthur C. Clarke Award, the John W. Campbell Memorial Award, and the Philip K. Dick Award. In 2015 he was awarded the Robert A. Heinlein Award for Lifetime Achievement. He and his wife live near Brunswick, Georgia.