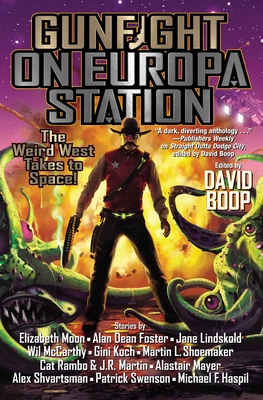 An actual wagon train to space?

What isn’t possible when you mix science fiction and Westerns?

The final frontier ain’t so final in these 12 tales of space exploration and adventure: each a timeless yarn told around the warm glow of a nuclear reactor just before it goes supernova. There’s a story for everyone who’s ever dreamed of traveling the stars.

From the lone stranger who flies into town to help a widow and her daughter to the alien rancher trying to pose as human, they are familiar, yet with completely new twists. Take the pair of mercenaries who sign on to stop a mining camp insurrection only to discover they might be on the wrong side of evolution, or the prospector who finds the strike of a lifetime but ends up stranded on a barren moon without hope of rescue. And if that’s not enough to catch your fancy, then how about a cloned Doc Holliday making his way in a future where both sickness and gambling are ancient history?

Assembled inside are the biggest names in science fiction, taking you to the farthest reaches of the galaxy like they’ve never done before. Elizabeth Moon, Alan Dean Foster, Jane Lindskold, and Wil McCarthy are some of the exciting yarn-spinners inside. So get ready to hit the hyper-thrusters as you set course for adventure, mystery, romance, and two-lasergun slinging action!

About Straight Outta Dodge City:
“A dark, diverting anthology of 14 original tales, the third in a series. . . . By tossing weird fiction concepts into western settings, these tales give rise to unusual what-ifs. . . . [T]he ever-enjoyable Joe R. Lansdale is on hand with 'The Hoodoo Man and the Midnight Train,' an energetic tale of a mystical gunfighter, and Harry Turtledove presents the delightful 'Junior & Me,' set in an alternate world in which evolution favored reptiles rather than mammals, and the ornery galoot narrating the yarn is actually a highly evolved dinosaur. The result is an amusing . . . bunch of stories.”—Publishers Weekly

David Boop is an award-winning essayist, recent Summa Cum Laude in creative writing (earned for a weird western piece), and former acquisition editor for both Flying Pen Press and Lifevest Publishing. David has been a journalist, actor, disc jockey, and stand-up comedian. He’s published across several genres, but specializes in weird westerns. Additionally, David has done media tie-in work for the Green Hornet, Veronica Mars, and the pulp hero the Black Bat (heavily disputed inspiration for Batman). He has collaborated with Kevin J. Anderson, the late C.J. Henderson, Peter J. Wacks, and Josh Vogt. He is a member of the Western Writers of America, the International Association of Media Tie-in Writers, the Horror Writers Association, and the Society of Children’s Book Writers and Illustrators.