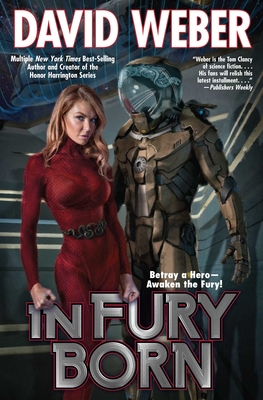 This is book number 1 in the Fury Series series.

AN ELITE WARRIOR IN A LINE STRETCHING TO THE U.S. MARINES OF OLD EARTH IS BORN AND COMES INTO HER POWER IN A CLASSIC TALE OF HEROISM AND ADVENTURE BY MULTIPLE NEW YORK TIMES BEST SELLER DAVID WEBER, CREATOR OF THE HONOR HARRINGTON SAGA!

Zhikotse. Shallingsport. Louvain. Sacred fields of battle on far-flung worlds where warriors of the Imperial Cadre spent blood and lives defending human civilization. Alicia DeVries was there; she led the charge. Her reward? Betrayal by a deceitful empire. Retirement to obscurity.

Now Alicia is the only survivor of a brutal attack on her frontier-world family. Not since the mighty Achilles has the ancient spirit of the Fury Tisiphone taken up residence inside a human being. But not since Achilles has a warrior so skilled, so implacable, and possessing so much battle sense sprung up among the mass of humankind. Hero of the Empire. Holder of the Banner of Terra.

There is a blood price to be paid. The Fury has awakened.