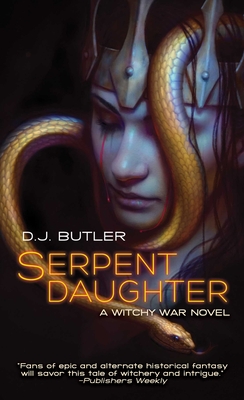 This is book number 4 in the Witchy War series.

Sarah Calhoun has taken her father’s throne and ascended into her goddess’s presence in Unfallen Eden, as her father never did.

Her uncle Thomas Penn isn’t done with her. Armed with new powers conferred upon him by the Necromancer and with new allies won via his impending marriage, Penn aims to remove Sarah from her throne—and from the world of the living. In the meantime, Sarah has fallen out with one of her best allies. Against Sarah’s advice, her brother Nathaniel heads into Imperial Philadelphia with the reckless and likely impossible aim of healing the Emperor Thomas.

On the shores of the northern seas, agents of Franklin’s Conventicle with an unlikely connection to the Emperor struggle to win allies among the pole-dwelling giants, who are torn between seizing land covertly from the Firstborn of the Ohio and entering the war openly on the side of Simon Sword. In the west, the Heron King rides an explosive storm into war, crushing the mortal kingdoms in his path and bearing down on Sarah’s Cahokia.

To survive—and to gain the strength she needs to fight this impossible war—Sarah must unite the Moundbuilder kings to enact an ancient rite that will propel her beyond mortality. To do so, she must not only win over doubters among the Firstborn kings, but she must also beat back a rebellion among the Handmaids of her goddess—for there are some of the goddess’s priestesses who long for the dark days of human sacrifice, and who are willing to throw Sarah herself upon the altar.

“For readers who love history-based fantasy, steampunk, or urban fantasy . . . this series that gives the genre a new twist.”—Booklist

“Butler’s fantasy is by turns sardonic and lighthearted; ghoulish shadows claw into the most remote areas and heroism bursts out of the most unlikely people. Sarah is the epitome of the downtrodden hero who refuses to give up until she gets what she needs, and her story will appeal to fantasy readers of all stripes.”—Publishers Weekly

“David's a pro storyteller, and you're in for a great ride.”—Larry Dixon

“ . . . [A] fascinating, grittily-flavored world of living legends. Hurry up and write the next one, Dave.”—Cat Rambo

“This is enchanting! I'd love to see more.”—Mercedes Lackey

“Witchy Eye is a brilliant blend of historical acumen and imagination, a tour-de-force that is at once full of surprises and ultimately heart-warming. This is your chance to discover one of the finest new stars writing today!”—David Farland

“[A] unique alternative-history that is heavily influence by urban and traditional fantasy and steeped in the folklore of the Appalachians. . . . Fans of urban fantasy looking to take a chance on something with a twist on a historical setting may find this novel worth their time.”—Booklist