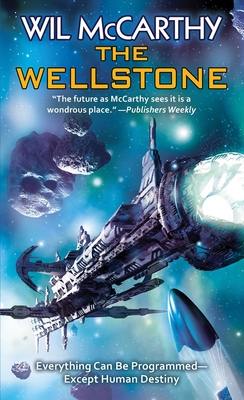 A CLASSIC OF HARD SF FROM WIL MCCARTHY. Back in print and just as relevant as ever! Exploring what the economics of abundance will really look like.

Humanity has conquered the Solar System. What’s more, death itself has been vanquished. Wellstone—programmable matter—ensures that no one need every die, or indeed, age past adulthood. But for the children of immortal parents, life remains a constant state of arrested development. And a prince shall remain a prince forever, never inheriting the throne. So what is a royal minor to do?

Bascal Edward de Towaji Lutui is tired of his parents—the Queen of Sol and her consort—treating his complaints as so much teenage whining. Exiled to a “summer camp” on a planette where he will be out of his royal mother’s hair, he decides to do something about his lot in life. Along with his fellow malcontents, he manages to make an improbable spaceship and set out for the far reaches of the colonized space. With hijacked weapons and programmable matter at their disposal, Bascal Edward de Towaji Lutui and his companions are set to prove themselves a force to be reckoned with.

“McCarthy is an entertaining, intelligent, amusing writer, with Heinlein's knack for breakneck plotting and, at the same time, Clarke's thoughtfulness.” —Booklist

“Imagination really is the only limit.” —The New York Times

“The future as McCarthy sees it is a wondrous place.” —Publishers Weekly

“A bright light on the SF horizon.” —David Brin

“Wil McCarthy demonstrates that he has a sharp intelligence, a galaxy-spanning imagination, and the solid scientific background to make it all work.” —Connie Willis

“In nearly every passage, we get another slice of the science of McCarthy’s construction, and a deeper sense of danger and foreboding . . . McCarthy develops considerable tension.” —San Diego Union-Tribune

“An ingenious yarn with challenging ideas, well-handled technical details, and plenty of twists and turns.” —Kirkus

Engineer/novelist/journalist/entrepreneur Wil McCarthy is an award-winning author whose short fiction has graced the pages of magazines including Analog, Asimov's, WIRED, and SF Age. His novels include the New York Times notable Bloom, national bestseller The Collapsium, and To Crush the Moon.