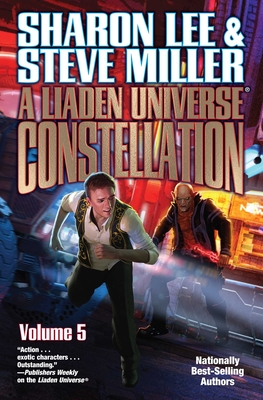 Tales of the Liaden Universe® brought together for the first time. Space opera and romance on a grand scale in a galaxy full of interstellar trading clans.

STORYTELLING ON AN EPIC SCALE

For more than thirty years, the Liaden Universe® novels by Sharon Lee and Steve Miller have captivated readers with their unique blend of action adventure, science fiction, and interpersonal relationships. In addition to twenty-one novels (and counting), Lee and Miller have written dozens of shorter works based in the Liaden Universe®, featuring the strong characterization, detailed worldbuilding, wit, and derring-do that readers of the series adore.

Sure to delight longtime fans and newcomers alike, these tales highlight why the nationally best-selling Liaden Universe® novels are treasured by space opera aficionados, with amazing settings, strong characterizations, compelling romance, and edge-of-the-chair action in stories that range from cosmic to comic.

Praise for A Liaden Constellation, Volume 1:
“This series [is] . . . the premier place to find good romantic SF adventure. . . . strong characters finding their own way (and, often, each other) in an action-packed galaxy of worlds. . . . Every story stands on its own; readers don’t have to be familiar with the Liaden universe. Those who have had the pleasure, though, will find many connections to existing tales.” —Analog

Praise for The Liaden Universe®:
“As always, this intelligent space opera focuses on matters of manners, honor, duty, and clever repartee; violence is rarely the solution, and subtlety wins out over overt force. . . . [Neogenesis] provides thoroughly satisfying progression or resolution for multiple threads and will feel comfortably familiar for fans of Korval’s escapades.”—Publishers Weekly on Neogenesis