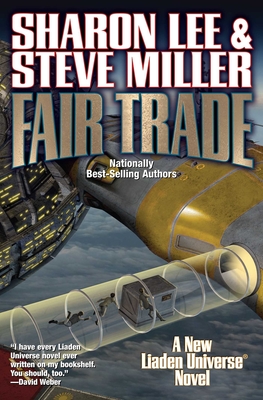 This is book number 24 in the Liaden Universe® series.

Jethri Gobelyn has risen far: from despised youngest on a Terran family Loop ship to second trader on premier Liaden tradeship Elthoria under the guidance of his unlikely foster-mother Norn ven'Deelin Clan Ixin. Master Trader ven'Deelin has taught Jethri much, and she expects great things from him. Indeed, one might say she demands them.

Jethri has inherited a mission from his father, a plan that will allow family Loop ships like the one he grew up on to survive the encroachment of Rostov’s Dust. In this, he’s backed by several prominent Looper families who are scheduled to meet and plan at the South Axis Trade Fair.

In what seems to be a fortunate pairing of missions, Master Trader ven'Deelin sees Jethri become lead trader on his own small ship, which is scheduled to arrive at the South Axis Fair.

Unfortunately, that “fortunate coincidence” may instead be a test of Jethri’s loyalties, as he’s thrust into a tangle of grey-trading, mistaken identity, misinformation, and galactic politics. . . .

About Dragon in Exile:
“. . . sprawling and satisfying. . . . Space opera mixes with social engineering, influenced by Regency-era manners and delicate notions of honor. . . . it’s like spending time with old friends.”—Publishers Weekly

About Necessity’s Child:
“Compelling and wondrous, as sharp and graceful as Damascus steel, Necessity's Child is a terrific addition to Lee & Miller's addictive series.”—Patricia Briggs

“. . . delightful stories of adventure and romance set in a far future . . . space opera milieu. It’s all a rather heady mix of Gordon R. Dickson, the Forsythe Saga, and Victoria Holt, with Lee and Miller’s own unique touches making it all sparkle and sizzle. Anyone whose taste runs toward SF in the true romantic tradition can’t help but like the Liaden Universe.”—Analog

“. . . the many fans of the Liaden universe will welcome the latest . . . continuing young pilot Theo Waitley’s adventures.”—Booklist on Saltation

“. . . aficionados of intelligent space opera will be thoroughly entertained . . . the authors’ craftsmanship is top-notch.”—Publishers Weekly on Lee and Miller’s popular Liaden Universe® thriller I Dare