ROBOSOLDIERS: Thank You for Your Servos (Paperback) 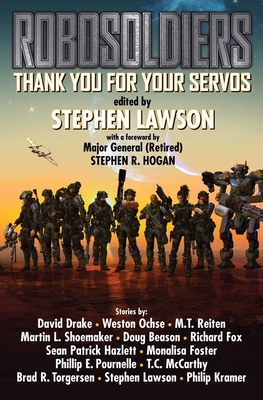 NEW STORIES OF AUGMENTED SOLDIERS AND THE FUTURE OF WARFARE. Near future, hard science fiction, and imagined military robotics and artificial intelligence in all domains of warfare (land, sea, air, space, and cyber) over the next fifty years as only Baen can do it.

The future of cybernetic warfare.

Robosoldiers. They take many forms, from disembodied AI to humanlike androids and more. But at their cores beat the cybernetic hearts of warriors! In these stories of hard military SF, you will journey to the battlefields of tomorrow with the veterans who have been there and the researchers developing the next phase of battle and get a glimpse into the future of warfare.

About Robosoldiers:
"Robosoldiers is easily for anyone who loves military sci-fi thrillers, especially if you love depictions of unmanned robots in combat situations." -Upstream Reviews

About the contributors:
“[P]rose as cold and hard as the metal alloy of a tank . . . rivals Crane and Remarque . . .”—Chicago Sun-Times on David Drake

“Brad Torgersen can write something technical and complex, yet still give it real emotional depth. He's one of the most talented authors I've ever read.”—Larry Correia on Brad R. Torgersen

“A well written novel that makes you consider the costs of war in very personal terms.” —SF Signal on T.C. McCarthy

“Shoemaker's story of an artificial life coming to terms with its own emotional world finds its place among the long and varied tradition of explorations of robot–human relations. . . . Recommended for any reader, genre or otherwise, looking for a pleasant and engaging read.”—Booklist on Martin L. Shoemaker

Stephen Lawson served on three deployments with the U.S. Navy and is currently a helicopter pilot and commissioned officer in the Kentucky National Guard. He earned a Masters of Business Administration from Indiana University Southeast in 2018 and currently lives in Louisville, Kentucky, with his wife. Lawson’s writing has appeared in Writers of the Future Volume 33, Orson Scott Card’s InterGalactic Medicine Show, Galaxy’s Edge, and Daily Science Fiction, as well as at Baen.com. He’s written two episodes of The Post-Apocalyptic Tourist’s Guide, which he also edits. His blog can be found at stephenlawsonstories.wordpress.com.

M.T. Reiten grew up in North Dakota where he discovered science fiction. He left grad school to join the Army and jump out of airplanes. He went into the Signal Corps, because they wanted electrical engineers. He spent time in Germany and Bosnia before returning to finish grad school. In the middle of his PhD, he got an opportunity to serve in Afghanistan with an infantry battalion. While deployed, he was a winner of the Phobos Award and Writers of the Future.

He returned to finish his PhD in electrical engineering (really physics, but don't tell anyone.) His stories have appeared in anthologies to include S.M. Stirling's, The Change: Tales of Downfall and Rebirth, and The Post-Apocalyptic Tourist Guide Series, and in SF magazines, such as DreamForge and an upcoming issue of Analog (a lifelong goal recently fulfilled.) He is also a Grand Prize winner of the Jim Baen Memorial Short Story Contest in 2020. He lives and writes in New Mexico with his wonderful wife and daughter and works at a government laboratory on national security technology.

Martin L. Shoemaker is a programmer who writes on the side...or maybe it's the other way around. He told stories to imaginary friends and learned to type on his brother's manual typewriter even though he couldn't reach the keys. (He types with the keyboard in his lap still today.) He couldn't imagine any career but writing fiction...until his algebra teacher said, "This is a program. You should write one of these."

Dr. Doug Beason, a PhD Physicist and Fellow of the American Physical Society, has written 16 novels, 2 nonfiction books, and over 100 scientific papers and short stories. His novels include THE OFFICER, SPACE STATION DOWN (with Ben Bova) and ILL WIND (with Kevin J. Anderson). A Nebula Award finalist for best SF Novel of the Year, he has written for publications as diverse as The Wall Street Journal, Analog, Physical Review Letters, Amazing Stories, Physics of Fluids, There Will Be War and Journal of Computational Physics. A retired USAF Colonel, Doug served on the White House staff for both Presidents Bush and Clinton, and was Commander of the Phillips Research Site/Deputy, Directed Energy, USAF Research Laboratory. He was previously the associate Laboratory Director of Los Alamos National Laboratory and was recently Chief Scientist of Space Command.

Doug served on the United Kingdom's Threat Reduction Advisory Board for the Atomic Weapons Establishment; was a member of the USAF Science Advisory Board; was the Principal US Representative for the US/UK/Canadian Satellite Program; and was VP of the Directed Energy Professional Society.

Doug is a 1977 graduate of the United States Air Force Academy (dual B.S. Physics and Mathematics), and was a senior service school Distinguished Graduate of National Defense University.  His book Science and Technology Policy for the post-Cold War: A Case for Long-Term Research was awarded the NDU President's "Strategic Vision" award and was used as a textbook at both the National War College and Air War College.

Richard Fox is the winner of the 2017 Dragon Award for Best Military Science Fiction or Fantasy novel. He's best known for The Ember War Saga, a military science fiction and space opera series.

His writing draws extensively from his experiences in the United States Army, where he served two combat tours in Iraq and was awarded the Bronze Star, Combat Action Badge and Presidential Unit Citation.

He lives in fabulous Las Vegas with his incredible wife and three boys, amazing children bent on anarchy.

Subscribe to Richard's spam free email list and get free short stories set during the Ember War Saga (and more as they become available) at:

Weston Ochse has spent the last thirty five years in and out of various military organizations. Most of his work was with special operations, but he was also no stranger to nuclear artillery and mechanized infantry units. He's been to Afghanistan several times and knows the special sound of silence after an IED has been blown. He's trained soldiers all over the world, including Papua New Guinea, and Thailand in advanced weapons, special operations techniques, and various small unit tactics. His fascination with robotics was spurred by the advancements of Boston Dynamics and companies developing similar technologies. Combined with is love for real living dogs, merging the two ideas to create this story was the only way the story could progress. The author of more than thirty books, his SEAL Team 666 books have been optioned by Dwayne Johnson to be a major motion picture. He has also worked on the franchises of Hellboy, X-Files, Predator, Aliens, V-Wars, Clive Barker's Midian, and Joe Ledger. When not trying to take over small countries, you can find him hunkered down in southern Arizona with his wife and rescue Great Danes.

T.C. McCarthy is an award-winning and critically acclaimed Southern author whose short fiction has appeared in Per Contra: The International Journal of the Arts, Literature and Ideas, Story Quarterly, and Nature. His debut science fiction trilogy, Germline, Exogene, and Chimera, were released in 2011 and 2012 to critical acclaim. In addition to being an author, T.C. is a PhD scientist, a Fulbright Fellow, and a Howard Hughes Biomedical Research Scholar who served as a weapons expert in the CIA during Operations Enduring Freedom and Iraqi Freedom. He has neither been fired on nor fired a shot in anger, but is a recognized expert in future warfare who has been invited multiple times by USSOCOM to speak on the topic of future warfare.

Brad R. Torgersen is a multi-award-winning science fiction and fantasy writer whose book A Star-Wheeled Sky won the 2019 Dragon Award for Best Science Fiction Novel at the 33rd annual DragonCon fan convention in Atlanta, GA. A prolific short fiction author, Torgersen has published stories in numerous anthologies and magazines, to include several Best Of Year editions. Brad is named in Analog magazine's who's who of top Analog authors, alongside venerable writers like Larry Niven, Lois McMaster Bujold, Orson Scott Card, and Robert A. Heinlein. Married for over 25 years, Brad is also a United States Army Reserve Chief Warrant Officer—with multiple deployments to his credit—and currently lives with his wife and daughter in the Mountain West. Where they keep a small menagerie of dogs and cats.

Philip A. Kramer, PhD is a biomedical researcher who studies muscle, aging, and metabolism. In addition to his academic works, he has published several hard science fiction short stories and non-fiction articles. In 2017, he won the Jim Baen Memorial Short Story Award sponsored by Baen Books and the National Space Society. His blog (pakramer.com) is an educational resource for writers who seek to more accurately represent science in their fiction. He currently lives in North Carolina with his fiancée, dog, and way too many birds.

Phillip Pournelle is a legendary military analyst. He carries on the high-powered tradition begun by his father, Jerry Pournelle. He resides in the Washington, D.C., area.

Stephen Hogan has served our nation in numerous military capacities since 1983. Most recently, General Hogan served as Commanding General of both the Kentucky Army and Air National Guard and as the Cabinet Secretary/ Executive Director of the Department of Military Affairs. After retiring from the military in December of 2019, General Hogan founded The Arlington Group to continue protecting our communities.

Monalisa Foster won life's lottery when she escaped communism and became an unhyphenated American citizen. Her works tend to explore themes of freedom, liberty, and personal responsibility. Despite her degree in physics, she's worked in several fields, including engineering and medicine. She and her husband (who is a writer-once-removed via their marriage) are living their happily ever after in Texas. Her current works, including her Ravages of Honor space opera series, are listed at her website, www.monalisafoster.com.