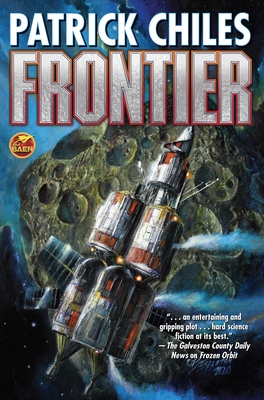 This is book number 1 in the Eccentric Orbits series.

THE FUTURE BELONGS TO THE STRONG OF HEART

Marshall Hunter only wanted to fly: the faster, the higher, the better.

On his first assignment aboard the patrol cruiser U.S.S. Borman, Ensign Hunter learns the novelty of Earth orbit wears off quickly. A life of rescuing wayward spacefarers and derelict satellites is far from the adventure he’d imagined as a young cadet.

His fortunes change when a pair of billionaire explorers are declared missing on an expedition to a nearby asteroid, one thought to hold minerals worth more than entire countries. With the couple out of contact and on a course that will eventually send them crashing into Mars, the nuclear-powered Borman is dispatched on an audacious high-speed interplanetary run to find them. Yet as Hunter and his crew approach the asteroid, the Borman itself becomes hopelessly disabled.

With the Space Force’s lone cruiser out of commission and far beyond reach, near-Earth space falls into chaos as critical satellites fail and valuable lunar mineral shipments disappear. Nothing is as it seems, and Hunter suspects none of it is by coincidence.

Facing an impossible choice between salvation and sacrifice, Hunter must find a way to save both his crewmates and Space Age civilization from an insidious foe.

“Reading through the book, it is very clear just how ripped-from-the-headlines this book really is... Frontier is an enjoyable near-future science fiction thriller, a lightning-fast plot that feels like something that could be seen within the next hundred years.” —Warped Factor

About Frozen Orbit:
“. . . hard science fiction and an entertaining and gripping plot. . . . Chiles nails the atmosphere of a NASA-run human spaceflight mission in the 21st century, the jargon of the mission controllers and astronauts, and the bureaucratic infighting characterizing today’s NASA. . . . The scenario and background . . . are the scaffolding on which a gripping tale is formed. Readers experience the wonder the astronauts feel on a remarkable voyage, groan as the Earth goes crazy as the expedition progresses, and thrill to a powerful conclusion . . . science fiction at its best.” —The Galveston County Daily News

About Farside by Patrick Chiles:
“The situations are realistic, the characters interesting, the perils harrowing, and the stakes could not be higher.” —John Walker, Ricochet.com

“. . . a fast-paced and exciting story that bounces between the borders of technological thriller and science fiction. . . . an impressive effort.” —The Galveston County Daily News