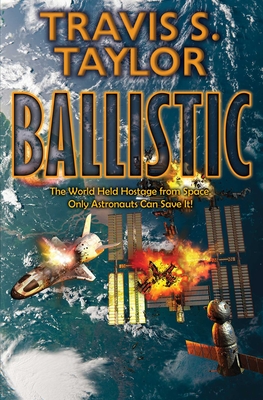 AN INTERNATIONAL CADRE OF MERCENARIES DOES THE UNTHINKABLE—HIJACKS THE ISS AND HOLDS THE WORLD HOSTAGE IN A BLAZING NEAR-FUTURE TECHNOTHRILLER FROM TRAVIS S. TAYLOR

Don't mess with our astronauts!

A Russian ICBM site is attacked just north of the Ukraine boarder. The nuclear warheads are missing! A Special Operations and Intelligence Community Task Force is rapidly put together to respond, but where it should deploy is unclear. A fire ravages a cosmonaut training facility in which five spacesuits disappear. And the Task Force finds a cache of detailed schematics of highly complex rocketry systems.The Task Forces reaches out to Dr. Amy Sue Harrington of the Missiles and Space Intelligence Center in Huntsville, Alabama. To Dr. Harrington, it all adds up to the unthinkable: someone—someone extremely well-funded—is taking aim at the International Space Station.

But Colonel Vladimir Lytokov and his team of mercenaries aren’t planning to bring the ISS crashing to Earth. They’re taking the fight to orbit, boarding the station and hijacking it. As the ISS traces its path across the heavens, Lytokov rains down destruction from above, effectively holding the entire globe hostage.

With all the rockets capable of reaching the ISS currently out of commission, the terrorists are untouchable in their orbital perch. But Lytokov and his men have overlooked one crucial aspect of their intricate plan: that astronaut Major Allison Simms is on board the ISS—and you don’t mess with American astronauts!  But can one astronaut hold out until the Task Force can come to the rescue?