The Blood Is the Life (Hardcover) 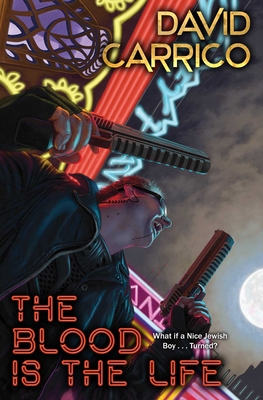 A COMING-OF-AGE STORY LIKE NO OTHER: CHAIM CAAN, AN OBSERVANT ORTHODOX JEW, FINDS HE MUST MAKE SENSE OF HIS PLACE IN THE WORLD WHEN HE DISCOVERS HE HAS BEEN TURNED INTO A VAMPIRE.

Chaim Caan was just out for a night of fun, blowing off some steam the way a young man will. After the better part of a year spent in COVID lockdowns, he was ready to let his hair down at a night club. But the young woman he encountered that night left him with something to remember her by: she turned Chaim into a vampire.

Soon, Chaim finds himself thrust into a weird underground world of mysticism and enchantment as he navigates life as the newly undead, trying to reconcile his beliefs as an Orthodox Jew with the new reality that has been thrust upon him.

He is forced to deal with a lot of change: to his body, to his mind, to his perceptions, to his relationships, and even to his world. He finds himself in parts of the world he had never dreamed of being in, and he finds himself doing things that he had never envisioned being a part of his life.

And if he can come to terms with these changes, this mild-mannered young man might just find himself a hero.

About 1636: The Devil's Opera, by Eric Flint and David Carrico:

“. . . an old-style police-procedural mystery, set in 17th century Germany. . . . the threads . . . spin together . . . to weave an addictively entertaining story. . . . a strong addition to a fun series.”—The Galveston County Daily News