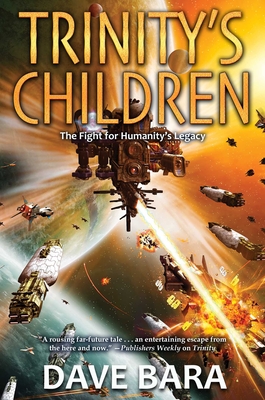 ONCE A DEFECTOR, NOW A LEADER, JARED CLEMENT MUST RISE TO THE OCCASION OR BE RESPONSIBLE FOR GENOCIDE

Jared Clement has returned to Trinity, not as a mere ship captain but as a Five Suns Fleet Admiral. With his promotion comes increased responsibility that weighs heavy on his shoulders: 30,000 settlers are leaving the dying planets of the Rim, his home, and resettling next to the natives of the planet Bellus.

Clement is responsible for those lives and the lives of the natives, Trinity’s children, and for building a better future for them all. But when his migrant fleet arrives in the Trinity system, they are faced with enemies both old and new. Former Fleet Admiral Elara DeVore has escaped her exile on the planet Alphus and vanished into parts unknown. Soon, however, Clement discovers she has a new fleet and a new ally, the Solar League from Earth. The Solar League has arrived with a massive fleet and plans on taking Trinity for itself, forcing the Five Suns to surrender. With just a small military fleet to accompany the migrants, Clement is faced with the almost impossible task of defending both his people and the natives from becoming slaves of the Solar League.

About Trinity:
“[A] rousing. . . far-future tale, taking hard-drinking former Rim Confederacy Navy Capt. Jared Clement of the gunship Beauregard into a whopper of a galactic confrontation. . . . [with] Clement’s rebirth as an idealistic military commander, leading to breathless Horatio Hornblower–type ship-to-ship action updated into a Star Trek–like environment. . . [with] plenty of fun, derring-do, and even some tension-relieving fraternization will keep readers invested in Clement and crew. This is an entertaining escape from the here and now.”—Publishers Weekly

"A true talent in the genre, Bara brings a scope of imagination to his worlds, building them brick by brick in your mind and populating them with stalwart characters, men and women of action rather than words... If far-flung space opera is what you seek, Bara is the author for you."—Rick Partlow, bestselling author of the Drop Troopers series

“This energetic mélange of tried-and-true elements—futuristic jargon, military and romantic tactics, and multiple levels of skullduggery—easily grabs the reader’s attention; more impressive is that Bara’s story holds that attention all the way to the end.” —Publishers Weekly on The Lightship Chronicles Series

“Bara manages to ramp up the depth and complexity of his world while retaining that sense of excitement, suspense, and adventure.” —Barnes & Noble Sci Fi & Fantasy Blog

Dave Bara is the author of The Lightship Chronicles Series, including Impulse, Starbound, and Defiant. His other works include Saint Cochrane's World, Speedwing, and stories in anthologies Infinite Stars, Star Destroyers, and The Chronicles of the Davids. Dave grew up as a fan of the Gemini and Apollo space programs and dreamed of being an astronaut one day. Since that time, he has restricted his journeys into space to the written word. He lives in the Pacific Northwest. His web page is davebara.info.