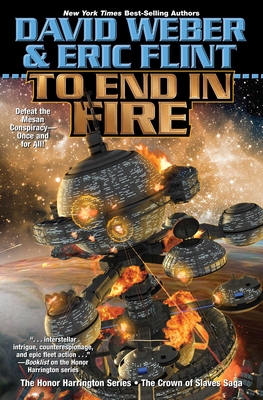 This is book number 4 in the Crown of Slaves series.

The Solarian League lies in defeat, crushed by the Grand Alliance of Manticore, Haven, and Grayson.

Obedient to the Alliance's surrender demands, the League is writing a new Constitution, to prevent the reemergence of out-of-control bureaucrats, like the "Mandarins" who led it to disaster. Frontier Security has been disbanded, the Outworlds' have regained control of their own economic destinies, and multiple star systems will soon secede from the League entirely.

Yet the League is—and will remain—the largest, most economically powerful human star nation in existence, and despite the overwhelming evidence that their unelected political leaders were the driving force behind the war, many League citizens deeply resent the fashion in which their star nation—the Solarian League—has been humbled. And those who most resent the Grand Alliance continue to blame Manticore for the nuclear bombardment of the planet Mesa after its surrender. They refuse to accept that the League—and the members of the Grand Alliance—could have been manipulated by a deeply hidden interstellar conspiracy called the Mesan Alignment. The Alignment is only an invention of the Grand Alliance, no more than a mask, a cover, for its own horrific Eridani Violations.

Not all Solarians feel that way, but even some of those who accept that there was an interstellar conspiracy cherish doubts about its origins. But it is still out there, and now defeated Solarians and agents of the victorious Alliance must join forces to find it. Even if they don't believe in it, it believes in them.

They must find it and identify it, to prove to revanchist Solarians that there was a conspiracy.

And they must find it and destroy it to end its evil—once and for all!

About the Crown of Slaves Saga:
“Fans of Weber's Honor Harrington series . . . will be delighted with this offshoot in which he and coauthor Flint develop several situations and characters from other stories. . . . This outstanding effort transcends the label ‘space opera’ and truly is a novel of ideas.”—Publishers Weekly

“[R]eads like a technothriller set in the age of the Medicis . . . ”—Publishers Weekly