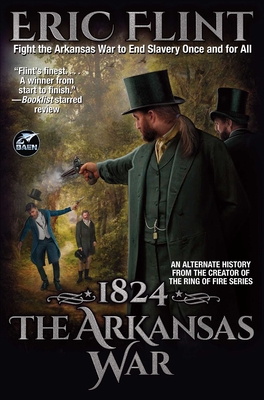 ALTERNATE HISTORY FROM A MASTER. Best known for his genre-defining Ring of Fire novels, Flint continues his alternate look at Jacksonian America in 1824: The Arkansas War.

The relocation of the southern Indian tribes to Oklahoma engineered by Sam Houston following the War of 1812 also swept up many black inhabitants of North America. Many of the states in the USA—free as well as slaveholding—have passed laws ordering the expulsion of black freedmen. Having nowhere else to go, they joined the migration of the southern Indian tribes and settled in Arkansas. What results by 1824 is a hybrid nation of Indians, black people, and a number of white settlers as well.

The situation is intolerable for the slaveholding states, which find a champion in Speaker of the House Henry Clay, whose longstanding ambition to become President of the United States looks to be coming to fruition. But Sam Houston and his friends and allies —the freedman Charles Ball, a former gunner for the US Navy and now a general in the Arkansas army, and the Irish revolutionary Patrick Driscol — are building a powerful army of their own in Arkansas.

The crisis is brought to a head by the election of 1824. The war that follows will be a bloody crisis of conscience, politics, economics, and military action, drawing in players from as far away as England. And for such men as outgoing president James Monroe, Secretary of State John Quincy Adams, charismatic war hero Andrew Jackson, and the violent abolitionist John Brown, it is a time to change history itself.