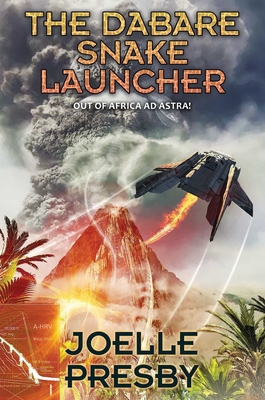 A RACE TO BUILD THE FIRST SPACE ELEVATOR IN AFRICA

New money, old tribes, and international megacorps race to build the first space elevator. With a little Dabare magic, it just might work!

The Sadous, an oil-rich West African family, are handed a plum contract as repayment for a decades-old favor that could tie them into an industry of the future—if the family doesn’t tear itself apart first.

Two engineer daughters of the Sadou family, Pascaline and Maurie, upon whom the burden of success rests, have troubles of their own. One wants nothing more than to leave and make her own name as an engineering prodigy, while the other is troubled by fever dreams and snakes.

Ethan Schmidt-Li is an ambitious megacorp executive with eyes on a big promotion—only to get more than he bargained for when put in charge of the company’s make-or-break project.

Endeley Adamou is the powerful nephew of a Bakweri chieftain walking the fine line between modernization and tribal tradition.

These are some of the people that Tchami “Chummy” Fabrice has brought together to an ambitious end: constructing the world’s first space elevator in Africa and ensuring the space industry that it catapults will enrich the continent and all involved. They have the carbon nanofiber, prime land around Kilimanjaro, and a captured rock in orbit for the tether.

The hard part will be getting all these different people working together long enough to see it built.

Praise for The Dabare Snake Launcher
“Joelle Presby’s novel is a fascinating fictional look behind the scenes of the construction of the world’s first space elevator in a near-future version of Africa that has enough grounded elements to be thoroughly believable . . . The story maintains a keen eye on the largely larger-than-life characters and respect for the business processes, customs, and beliefs of the people on the ground making things happen.” —Wole Talabi, Locus Award–nominated author and editor of Africanfuturism: An Anthology

"You guys should all be on the lookout for Joelle Presby’s solo Baen novel THE DABARE SNAKE LAUNCHER. It is… remarkable. Just truly, truly remarkable.”—David Weber, NYT Bestselling author of the Honorverse series

"The Dabare Snake Launcher is a very believable depiction of when this species decides to do something amazing: backstabbing, plotting, and inflamed passions galore. Presby has created a future that I could easily imagine reading on the news in a few decades, and the novel is all the better for it."—Warped Factor

“The Dabare Snake Launcher takes you on a journey of possibilities, an Africa foremost in groundbreaking technology and not focused on deprivation and poverty. Joelle’s writing is nuanced . . . There’s family drama . . . romance . . . and laugh-out-loud humour. Writing is vivid and the characters fascinating.” —Hannah Onoguwe, author and poet

"Set in Cameroon, where the author lived for many years, and full of lovely detail about the local cultures, clashes between traditional and modern, and differing expectations."—Jane Lindskold, author of the Star Kingdom series and Over Where series.

Praise for Joelle Presby
“Joelle Presby has a knack for engaging characters and plots that skillfully walk the line between science and storytelling.” —Oghenechovwe Donald Ekpeki, Nebula Award–winning and Hugo Award–nominated author and editor of The Year’s Best African Speculative Fiction

“Presby’s prose is efficient and shows intricate knowledge of both engineering and engineering management considerations. This infuses the story with the sensibility of a techno-thriller without the usual breakneck action pace that can sometimes sacrifice character development . . . I am eager to see what Presby writes next.” —Wole Talabi, Locus Award–nominated author and editor of Africanfuturism: An Anthology

Joelle Presby is a former U.S. Navy nuclear engineering officer turned corporate consultant turned writer who grew up in West Africa. Her first-reader husband works for NASA. They live in Ohio with their two children.